Recycle Ann Arbor launched collection in parts of the city in 1978 as a program of the Ecology Center, receiving its first city contract in 1981 and expanding to serve a majority of the community by 1985.

After decades of helping divert waste from landfills, the organization might end up being kicked to the curb.

“This means that the city would collect all trash, compost and recycling from curbside residential carts,” said Molly Maciejewski, the city’s public works manager, noting that means hiring several new full-time city employees to do the work using city crews. 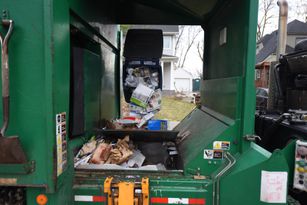 Is it time to launch regional recycling in Ann Arbor area?

It’s been two and a half years since Ann Arbor shut down its recycling plant due to safety concerns, and recyclables are still being trucked 250 miles to Cincinnati for processing.

It’s one of several recommendations in a new draft solid waste plan that’s drawing criticism from community members who fear it could seriously hurt or mean the end of Recycle Ann Arbor.

“Recycle Ann Arbor is one of the foremost recycling organizations in the nation,” city resident Eric Lipson told council, noting he worked for the nonprofit two decades ago.

“If we don’t support our local organizations, which have been doing the job for 40 years without a hitch, what good are we as people?”

In addition to handling curbside pickup and transport of residents’ recyclables to a processing facility — two contracts that expire next June — Recycle Ann Arbor also operates the Drop-Off Station at 2950 E. Ellsworth Road under contract with the city, the ReUse Center at 2420 South Industrial Highway, and the Recovery Yard formerly known as Calvert’s Roll-Off Containers at 7891 Jackson Road.

“Ann Arbor was long a leader in innovative, mission-driven diversion of waste from the landfill, working in partnership with community-based nonprofits like Recycle Ann Arbor,” Ezekiel said, arguing the city has taken its eye off the ball in recent years.

“We haven’t kept up with the opportunities that exist in today’s world, or the challenges,” he said. “We’ve had a couple of huge problems created by mismanagement.”

That includes problems in downtown alleys and the shutdown of the city’s recycling plant, also known as the Materials Recovery Facility or MRF, Ezekiel said.

The plant has been out of operation since 2016 due to safety concerns, and the city’s recyclables are now trucked to Cincinnati for processing. 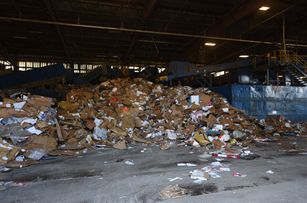 The draft solid waste plan “barely addresses these issues,” Ezekiel argues, “and yet it proposes big changes to the part of our system — residential collection — that runs well.”

The Sierra Club is calling on the city to “fix the damn MRF” and get it up and running again, either in partnership with Recycle Ann Arbor or another operator, Ezekiel said.

The city has issued a request for proposals, seeking an operator for the plant, and bids are due Sept. 17. A five-year contract could go to council in October and take effect next July if approved.

The Sierra Club also is asking the city to join a new regional waste authority and work with other partners on repairing or replacing the Drop-Off Station before it falls victim to neglect.

And for now, the club urges council to reject the draft solid waste plan, which the city hired consultant Aptim Environmental and Infrastructure Inc. for $250,000 to help draft.

“It does have some parts that are acceptable, but as a whole it’s not OK,” Ezekiel said, arguing it approaches recycling as a problem to be solved in the cheapest way.

“This is the same type of thinking that helped degrade the quality of U.S. recycling steams so much that the Chinese told us to stop sending our so-called recyclables.”

City staff argued the city’s costs are driven up by an unnecessarily complex operational model for solid waste services, which include trash, recycling and compost collection.

“We don’t have to be as complex as we are and it actually erodes our service level,” Maciejewski said.

Depending on where someone lives or works, any one of three entities may collect materials put out for pickup — the city, Recycle Ann Arbor or Waste Management, said Cresson Slotten, the city’s project manager for the solid waste plan update.

Those materials are taken to three different facilities where the city has contract operators, Slotten said.

“Multiple players, multiple contracts, lots of moving parts, a very complex system. That’s what I was given to try to improve,” he said.

The draft plan includes 24 recommendations, including expansion and improvement of programs.

A survey shows residents want additional services and are willing to pay for them, Slotten said.

First and foremost, that includes curbside collection of bulky items and year-round compost collection, and then expanded hazardous/electronic waste and clothing/textile collection.

Those are recommended in the draft plan, funded in part by savings from consolidating collection services.

Council Member Jane Lumm, I-2nd Ward, said the analysis is exceedingly well done, the recommendations are reasonable and the council has important decisions to make.

“I support the approach taken here of identifying cost savings and efficiencies as a first means of funding the desired added services,” she said. “Obviously the savings are dramatic, potentially.”

If the city doesn’t consolidate services, other possible funding options include a tax increase or user fees.

The city has a property tax for solid waste services and survey respondents support keeping that.

It cost the city $4.49 per cart per month to have Recycle Ann Arbor do residential curbside recycling collection in 2017-18, and that could drop to $2.44 if done in-house, the city estimates.

Recycle Ann Arbor questions the financial analysis and argues insourcing curbside collection would save the city very little, if any, money, said Phil Tepley, one of its board members.

“Frankly, the only accurate way to obtain an accurate cost of future curbside service is to seek competitive bids for that service,” he said. “We welcome any transparent bidding process that compared actual costs, and we believe that such a process would reveal our operations are both cost effective and mission effective.”

The city’s solid waste revenues totaled $16.7 million in fiscal year 2017-18, leaving a $517,560 surplus after expenses, but that flipped to a $1.9 million deficit after accounting adjustments, Slotten said.

The city reports $6.7 million in direct expenses for recycling collection/processing that year, including $2.8 million for residential collection.

Recycling is a core value and the city is not going to stop it, but it comes at quite a cost, Slotten said, noting the city’s per-ton commodity revenue from recyclables has dropped from more than $80 to about $20 since July 2017 due to market downturns.

The goal of the new plan is to build on existing residential programs and services and offer new services, while also ensuring all businesses are participating in trash and recycling collection in accordance with city ordinances, and to increase commercial waste diversion, Maciejewski said. The city knows there are businesses not participating, even though it’s required, Maciejewski said.

“We don’t have the means, though, to go out and do the outreach and enforcement needed to bring those businesses into compliance, which would actually then increase our diversion,” she said. “So, that was a driver for the recommendations.”

The plan recommends ongoing inspection and enforcement of commercial properties to ensure compliance.

The plan recommends a number of other changes for commercial customers, including better management of fats, oils and greases, which are a problem in downtown alleys, and formalizing food waste collection from restaurants, Maciejewski said.

The city has heard loud and clear it needs to improve services downtown, Maciejewski said.

An overflowing dumpster surrounded by piles of garbage on the ground is a common sight in the alley behind Sava’s Restaurant.

One of the recommendations is mandatory Saturday and Sunday collection downtown when restaurants are busy and trash and recycling containers in alleys fill up.

“We know that we must improve conditions in the alleys,” she said. “It will help overall with the downtown, with appearance, with cleanliness, safety in the alleys.”

Other recommendations include procuring a single downtown service provider, and hiring more employees to focus on community outreach and education as it relates to solid waste.

The plan supports working collaboratively with regional partners to replace the Drop-Off Station and to hire a new recycling plant operator, though it didn’t evaluate the facilities, Maciejewski said.

Wind Turbine Blades Can’t Be Recycled, So They’re Piling Up in Landfills

Safeguarding the Environment – Recycling and Its Impact