With this one hack, you’ll never have to worry about gift wrapping again. This trick can wrap even the trickiest, oddest-shaped presents!
Reviewed.com 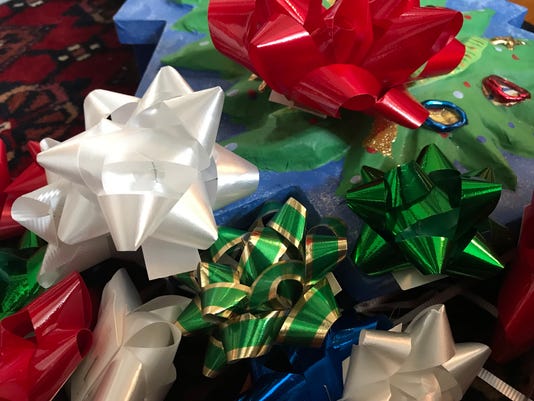 Bows retrieved from Christmas presents. These can’t go into paper recycling, but can easily be saved and reused with a quick bit of tape on the back.(Photo: Elizabeth Weise.)

SAN FRANCISCO –  Is wrapping paper recyclable? Do you have to get every last bit of tinsel off the tree before it heads for the chipper? Do bows and ribbons go in the trash?

Here’s what recycling experts say is the right way to clean up from Christmas.

As pretty as they make a package, the plastic-paper composite of most bows doesn’t work when you’re trying to create cardboard. Add in the glue that sticks them to the gift and they’re a no-no in the recycling bin.

“I don’t know of any paper mill in the United States that would want a bow in their incoming bales,” said Chaz Miller, policy director for the National Waste & Recycling Association.

The good news is that they’re probably the easiest Christmas item to reuse rather than recycle. Even if they lose their stickiness, a bit of tape makes them as good as new.

During the unwrapping, keep a paper grocery bag next to you and play “can you dunk it?” with the bows that come off the presents. You may never need to buy a bag of bows again. When they’re truly dead, trash them. 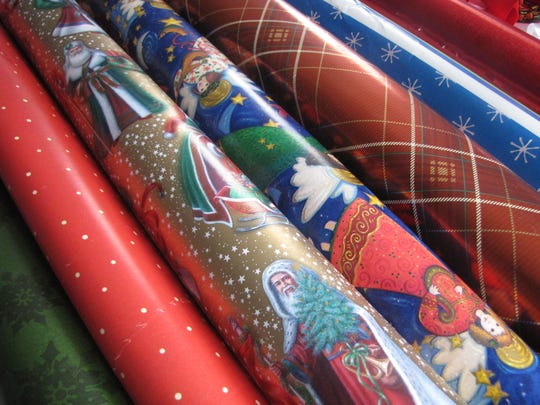 Yes, you can recycle Christmas wrapping paper – unless it’s metallic, has glitter or has velvety flocking on it.

And don’t worry about getting all the tape off before you toss it in the bin, though the more you can pull off the better. When you’re wrapping presents, think “less is more” when it comes to tape.

You can always go a step further and roll up the paper to use again later. Or wrap gifts with comics or old maps. And reusable gift bags are nice because they can be, well, reused.

You wouldn’t think shiny curls of ribbon would strike fear into the heart of recycling plant managers, but they do. Please keep them out of the recycling bin.

A bow can go through the entire system and be screened out by the pulping equipment. Ribbons, on the other hand, are insidious.

Facilities that accept commingled recyclables and sort out the cardboard use a large piece of equipment called disc screens, or sets of spinning discs with spaces in between. Large flat items like cardboard are carried up and over the screen, while smaller items fall through the spaces between the discs.

Over the space of just a few hours, the gaps between the discs can fill up until the smaller items that were supposed to fall through the spaces no longer can.

To fix the problem, “the facility then needs to shut down all the equipment so they can get in and cut out all the junk that has wrapped around the shafts holding the discs,” said Peter Spendelow, a materials management specialist for Oregon’s Department of Environmental Quality.

A glittery Christmas card. While the glitter is lovely, it’s non-recyclable and means the card shouldn’t be put in recycling. (Photo: Elizabeth Weise)

You need to sort them.

But the shiny Christmas cards printed on photo paper need to go into the trash. It’s the same with ones that have lots of metallic embossing, though usually you can tear the card in half and at least recycle the paper portion, Recology’s Reed says.

Cards that have a lot of glitter on them should also stay out of recycling.

“You can’t recycle glitter,” he said.

Online purchases now make up 9 percent of all U.S. retail sales, according to the Department of Commerce. All those sales mean more individual boxes being shipped to customers’ homes – and in turn more boxes that need recycling.

Cardboard is a great material to recycle because it’s clean, easy to reprocess and every ton of it that’s reclaimed saves 17 trees, said Reed.

As you engage in the oddly satisfying task of breaking down boxes, ponder that everything you’re tossing in the recycle bin will most likely come back to you next year. Many of the items we order online are made in China and arrive in cardboard boxes made in China. Which are made from recycled cardboard from the United States.

That said, that particular virtuous loop is becoming more problematic as China is now rejecting all but the cleanest, purest loads of cardboard, making it all the more crucial to properly recycle your boxes.

The most important thing when recycling boxes is simply to break them down flat. Otherwise they take up so much room in the recycling trucks that they have to make extra trips, requiring more energy and eating up all the net good recycling would have done in the first place

“Get yourself a razor knife from the hardware store so you can easily slice the boxes up,” said Reed.

Packages closed with paper tape don’t require anything more than flattening. Boxes with a single strip of plastic tape are OK, too. If you get one with a lot of heavy-duty, strapping plastic tape, it’s worth taking a moment to peel one end up so you can pull the whole strip tape of as the strong adhesives and plastic in some tapes can create a problem at the paper mill.

And if you’re the one wrapping the box for shipment, paper tape is a lot easier to recycle. Just saying.

When you’re breaking down cardboard delivery boxes, make sure you remove all plastic air pillows, plastic bags and bubble wrap. It goes in the trash, not in recycling. (Photo: Elizabeth Weise)

About those packing boxes

Another thing about everything you had delivered is that it probably came with some sort of plastic inside, whether it was plastic air pillows, bubble wrap, plastic bags or plastic wrap. As you empty out and break down the cardboard boxes, make sure the plastic gets thrown in the trash and doesn’t end up in recycling.

Keeping plastic out of recycling makes it easier to turn waste paper into new cardboard. Extra points if you take the time to pop the plastic air pillows before you throw them in the trash. Besides, it’s fun. 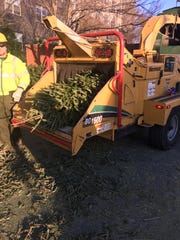 Christmas trees going into the chipper in Georgia, as part of the Bring One For the Chipper campaign. (Photo: Keep Georgia Beautiful)

Artificial trees aren’t recyclable, though of course there’s lots of debate as to whether they’re more environmentally friendly.

But if you’ve got a real Christmas tree, there are a few things you need to know before you toss it out on the corner to be turned into mulch, a fish reef or hillside stabilization.

“They contain non-organic material and, therefore, are not biodegradable,” she said.

And make sure you get all the ornaments, lights and the tree stands off the tree. Take a moment to look from every side after you’ve de-decorated it. Don’t leave a prized ornament tucked in the back.

Finally – and we know this isn’t easy – you’ve really got to get as much of the tinsel off as you can. The good news for those who live for icicles on their trees is that you don’t have to remove every single strand.

Whitehead, who heads the Bring One For the Chipper program, encourages people to pull as much as they can off. “But removing every single strand is not an easy task, however, and someone may not be able to catch every bit, so we encourage individuals to do the best they can in getting the majority removed,” she said.

Recycling Center Will Be Forced to Close Without Immediate Funding Support

Essential component in the fight against climate change

Dos and don’ts of recycling in Lewiston

Baerlocher to spotlight high-performance additives for recycling at K 2019