WORCESTER – On Thursday, Feb. 28, the Public Works Committee will hold a public meeting to hear comments from Worcester residents regarding its Comprehensive Clean City Program — with a proposed plan to adopt clear plastic bags in place of the City’s current 18-gallon recycling buckets.

The meeting begins at 5:30 PM in the Levi Lincoln Chamber at Worcester’s City Hall – 455 Main St.

What is the City’s Proposal?

The Clean City Program proposes the following at an additional $1.2 million in costs of on top of the already nearly $8 million in FY19 for Sanitation Programs.

From City Manager Edward M. Augustus, Jr.: “In order to fund the initiatives proposed and address the continually escalating cost of the City recycling program, we plan to propose an increase in the trash bag fee of .50 cents per bag in FY20. Based on the usage of bags in recent weeks, this will result in an average increased cost of 53 cents per week. Since the implementation of the ‘pay-as-you-throw’ program in 1993, the bag fee has only increased twice, with the last increase occurring 10 years ago.”

According to the Department of Public Works, switching to clear plastic recycling bags will result in an increase of trash bag revenues of around $1.4 million. This increase will decrease the tax levy support of the sanitation programs by nearly six percent in FY20. 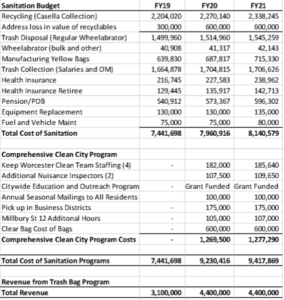 Sanitation Budget from the City of Worcester

However, if the amount of recycling bags isn’t sufficient enough for a resident, rolls of ten recycling bags will be for sale at the same retailers for $1.50.

Current and Future Trash Bag Revenue from City of Worcester

Pros and Cons of Clear Recycling Bags and implementation of Cleaner City Program:

Massive fire breaks out at recycling site on Dumfries farm

Spring Is For Cleaning And That Means E-Waste Disposal [Facts]