The modern division of household chores is a curious affair. My impression — not just based on my own experience — is that most men are heavily involved in the complex and laborious business of recycling.

I don’t say they do more than women, only that in this one area of domestic life they tend to put in a full shift — diligently sorting bottles and cans, dropping different sorts of plastic into the right bin, and lugging black bags full of ordinary household waste.

So members of both sexes will doubtless be equally aggrieved by the news that recycling rates in England are going into reverse while more rubbish than ever is being burnt.

According to official figures just released, in the 12 months to March, 50 out of 123 councils in England incinerated more than half the household rubbish they collected, including plastic and paper.

The worst offending councils are in London. In Tory-controlled Westminster, for example, an amazing 82 per cent of all household and recyclable rubbish was incinerated. 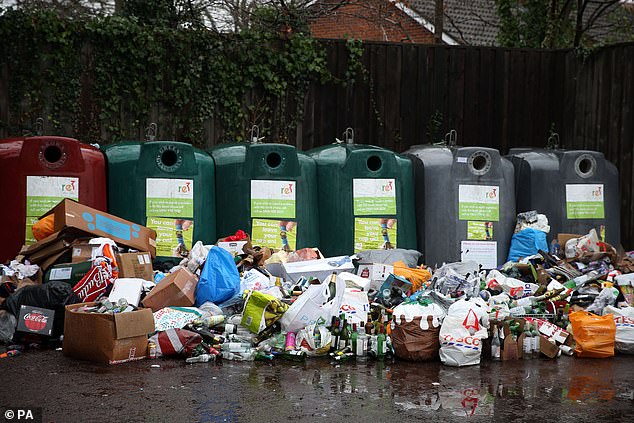 According to official figures, in the 12 months to March, 50 out of 123 councils in England incinerated more than half the household rubbish they collected, including plastic and paper

Councils in Birmingham, Sunderland, Portsmouth and Slough performed scarcely more creditably. All of them incinerated more than 70 per cent of their plastic, paper and household rubbish.

The inevitable conclusion is that many people are wasting a great deal of precious time. During a typical month, most of us probably spend several hours cumulatively agonising over such matters as whether a metal bottle-top or discarded bleach container should be recycled or not.

I am relatively fortunate, living as I do in a place where most recyclable material apart from garden waste goes into one wheelie bin, though getting rid of some items still demands an occasional visit to the dump, which by the way is policed by a collection of pretty sinister-looking gentlemen.

But lots of people have to sort their stuff into two, three or even four bins, which is a time-consuming and sometimes mentally challenging operation.

Speaking personally, having started off a decade ago as a sceptic, I have become an almost model recycler. Admittedly with the encouragement of my wife, I now find myself robotically rinsing and re-rinsing empty wine bottles.

From time to time, I confess, I have had my doubts. I was badly shaken when a few months ago the Local Government Association suddenly divulged that the black plastic in ready-meal packs was hard to process.

I asked myself how many hundreds of those I had cleaned to no purpose over the years. Why hadn’t the authorities told us that before? Were they treating us like stupid children who couldn’t be trusted with the truth?

It recently emerged that nine out of ten councils are sending hundreds of millions of plant pots to landfill or for incineration every year. This is despite local authorities being told that the red ones can be recycled. 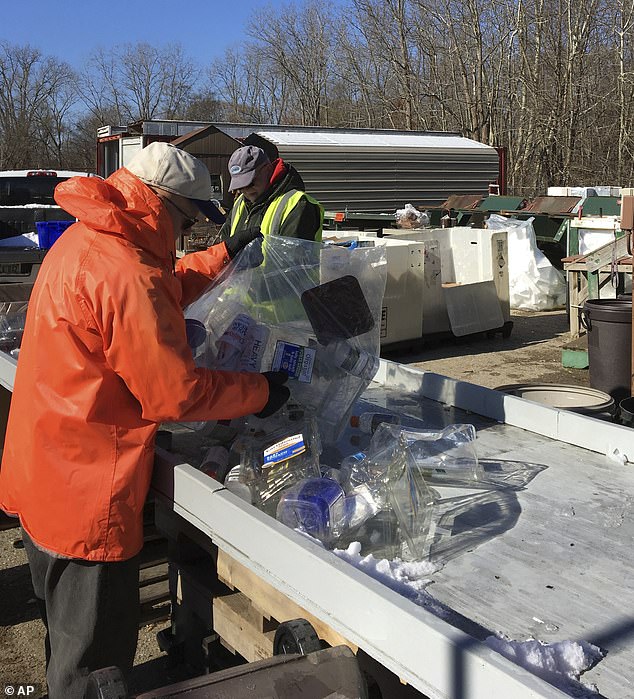 Councils in Birmingham, Sunderland, Portsmouth and Slough incinerated more than 70 per cent of their plastic, paper and household rubbish

The new figures published earlier this week would appear to confirm that we ardent recyclers have often been wasting our time, and that those heated family debates over whether or not a receptacle can be recycled are largely futile. There is a high probability it will go up in smoke.

Many councils — and the Government that stands behind them with its official targets — are taking us for fools. They preach the value of recycling and engage our loyalty in what is presented as a vital social enterprise to save the planet.

They even try to justify introducing three-weekly garbage collections — to the delight of local foxes and rodents — on the questionable grounds that people are more likely to recycle if their bins are emptied less often. One council in Wales now collects only once a month!

Sententious councils bully householders over minor infractions. Bin men are expected to write reports on thousands of families for rubbish and recycling ‘offences’, and have been instructed by officials to rifle through domestic garbage and record where recycling is ‘contaminated’ with food or other waste.

And yet when our backs are turned after our mostly heroic efforts, many of these same councils, which demand such high standards from us, furtively slink off and put a match to the rubbish we have painstakingly sorted. 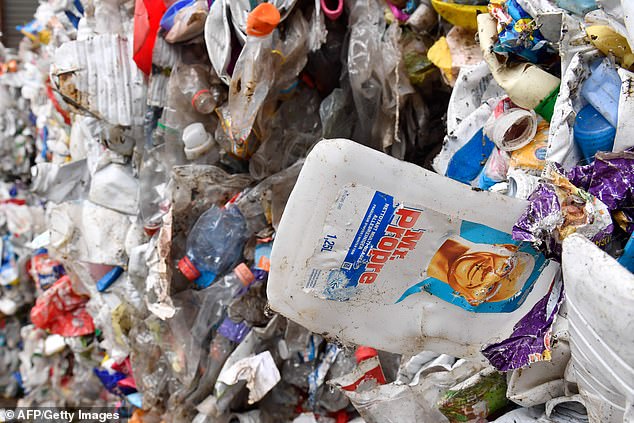 Some councils are increasingly inclined to burn more waste, including much recyclable material, in incinerators, which are becoming more cost effective

What is going on? One big factor was China’s announcement last year that it no longer wants to be the ‘world’s garbage dump’. The country has drastically reduced the kinds of solid waste it is prepared to accept. As a result, enormous piles of recyclable rubbish are reportedly building up here.

So some councils are increasingly inclined to burn more waste, including much recyclable material, in incinerators, which are becoming more cost effective. Since 2010, 21 have been built, bringing the total to 44. Some 18 are under construction.

The trouble is that these incinerators are believed by many experts to be dangerous because they release ultra-fine particles and harmful toxins into the air we breathe. They also contribute to the build-up of greenhouse gases.

But there is perhaps an even more serious objection. It is wasteful to burn rubbish which can be recycled. Re-using glass or paper or plastic is obviously good for the planet. That’s why so many of us signed up to the project despite our initial doubts.

Of course, I don’t want to give the impression that all the plastic and paper and cardboard which we scrupulously put in our bins is being set alight. Some 45 per cent of the household rubbish we produce is being recycled.

Nevertheless, the country — or at any rate England — is on the verge of burning more waste than it recycles. The Government’s EU-imposed target of recycling 50 per cent of all waste by 2020, and 70 per cent by 2030, now looks unrealistic, and is surely beyond reach.

The danger is that once people believe recycling is a waste of their time, they will do less of it. If we think that a plastic bottle or cardboard box will probably end up in an incinerator, we can be forgiven for shoving it into a black bag containing general rubbish.

That is why this breach of trust on the part of the authorities is potentially so damaging. It’s clear that they have not levelled with us. They are not keeping their side of the bargain.

If the Government is ever able to take its mind off Brexit, it should put more pressure on errant councils such as Westminster to achieve a higher level of recycling once we’ve gone to the trouble of doing all that tedious separating out of food, paper and plastic.

And it should also insist on greater honesty and transparency, so that people are not asked to spend precious time sorting items which are in fact bound for the incinerator.

What a presumption on the part of the authorities! The pity of it is that most people are only too happy to join in the process of recycling. We want to save the planet. We just don’t want to be taken for idiots.

Clear Out Your Office Clutter This Summer

How Bad Are Disposable Razors For The Environment?