A VERY well-earned holiday! How a homemade recycling station is helping a family save for their dream vacation

An Australian woman has revealed her quirky idea to help her save for a dream holiday, and it’s one that’s good for the environment too.

She’s set up a recycling station for glass, aluminium cans, plastic bottles and bottle tops and says the money she collects will go towards funding a family vacation.

‘We decided that the money collected from the recycling will go towards our Team Rees Family Adventure Fund!’ The woman wrote in a Facebook post. 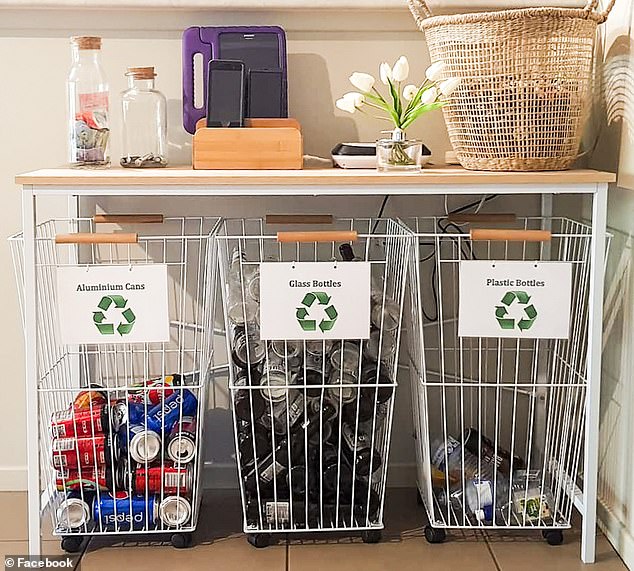 How much can you earn from recycling?

* Earn and Return schemes in NSW offer a 10 cent refund for a range of recyclable goods.

* Beverage containers (between 150mL to three litres) are eligible provided they are made from glass, plastic, aluminium, steel or liquid paperboard.

* These need to be in good condition (not broken or crushed), be empty and have the label attached.

She shared her recycling station was created using items from Kmart, including three wire laundry baskets, priced at $15 each, and a desk, priced at $39.

She’d labelled each of the baskets, which sat under the desk ‘Aluminium cans’, ‘Glass Bottles’ and ‘Plastic Bottles’.

Extra recycling for bottle tops was added in the form of a wicker basket which sat on top of the desk.

A jar was also seen on display which contained batteries also destined for recycling.

Photos also reveal the woman had experienced some success with her idea as there was a jar half filled with notes and coins.

As well as saving bottles, cans and plastics, a basket has also been added to the station in order to collect steel bottle tops

From the number of likes the woman’s post received, it was clear her unique savings idea had resonated with many.

‘This is great,’ one commenter remarked before adding: ‘We recycle but things just end up laying around, or in lots of different boxes waiting until we have enough to take to the drop off point!’

Another said: ‘Wow! Fantastic idea thanks for sharing this.’

‘This is so awesome!! Great work!’ A third chimed in. 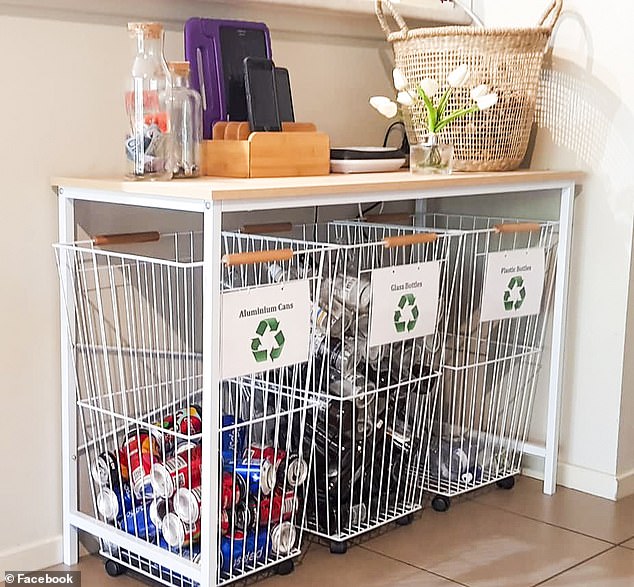 In Australia, depending on the state you live in, glass, aluminium and plastic can be returned to a recycling processing plant in exchange for cash.

Western Australia has announced plans for a scheme commencing in early 2020.

Trick Or Treat And Learn About Recycling, From TerraCycle and Rubicon...

What distributors and manufacturers need to know about trash compactor rental

Recycling back on track but slow-downs expected if people don’t sort...