China’s largest lithium producer plans to build a battery recycling plant in Mexico to supply minerals to the US as it looks to tap a growing market for used materials in electric vehicles.

Wang Xiaoshen, chief executive of Ganfeng Lithium, said the Mexican facility could recycle batteries from Tesla cars as well as Chinese electric buses in use across Latin America, from Santiago in Chile to Medellín in Colombia.

“Chinese electric buses have been exported to South American countries for years and now is about time to recycle,” Mr Wang told the Financial Times. “And Tesla has been selling in Mexico since 2012, so in the next couple of years they will be ready for retiring.”

Hong Kong-listed Ganfeng, which has agreements to supply lithium to Tesla and South Korea’s LG Chem, has grown rapidly over the past decade into one of the world’s largest producers of lithium through acquisitions of assets in Australia and Argentina.

In May last year the company bought a stake in London-listed Bacanora, which is developing the Sonora lithium project in Mexico, the country’s largest lithium deposit. Mr Wang said the recycling plant could be near the mine, and both could supply the North American market with lithium for batteries.

We shouldn’t be a paradise for exploitation. That’s called looting

Recycling is set to become a significant source of new battery raw materials by the end of the decade as car companies look to improve their carbon and environmental footprint. This month Amazon said it would invest in a battery recycling start-up run by Tesla co-founder JB Straubel. Tesla has also said it will open a battery recycling facility this year in Reno, Nevada.

China is the largest recycler of used lithium-ion batteries globally, with eight of the largest companies, according to the consultancy Circular Energy Storage.

“Nationalisation may not be a good idea; there are many bad examples of nationalisation of resources,” Mr Wang said. “An example is Bolivia. There are big lithium resources there but for many years no project has been built because Bolivians don’t allow foreign companies to own mining properties. That’s a big hurdle for attracting investment.” 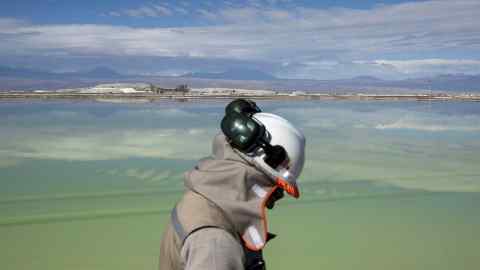 Alejandro Armenta, a senator from Mexico’s ruling Morena party and head of the Senate’s finance commission, told the FT that Mexico should create a new state-owned entity, Litiomex, to regulate lithium mining.

“It’s about ensuring there is a benefit for the country,” he said after introducing an initiative calling for constitutional changes to make lithium, like oil, the property of the Mexican nation.

“This is not about closing the door to investment, of course not,” he said. “But there needs to be regulation. We do not agree that an asset that is so important in Mexico should be exploited without regulations . . . We shouldn’t be a paradise for exploitation. That’s called looting.”

Shares in Ganfeng have risen 92 per cent this year in Hong Kong. This month the company raised HK$1.45bn (about $187m) through a placement of new shares to invest in expanding capacity.

How You Can Easily Find a Small Pyrolysis Plant for Sale...

OTL #690: Stories from a trolley driver, Is Chicago failing at...