Mitsui will launch operations in China to produce fuel ethanol from steel mill emissions in a three-party deal with state-owned energy company Guizhou Jinyuan Group and the Chinese joint venture of LanzaTech.

A $75 million plant with an annual capacity of 60,000 tons will come online in Guizhou Province by the end of next year, with annual sales targeted at about $57 million.

Long dependent on operations involving fossil fuels, such as coal and oil, Mitsui hopes to burnish its environmental credentials among socially conscious investors by pushing a clean energy project.

U.S. energy startup LanzaTech, in which Mitsui owns a stake, uses microorganisms from rabbit droppings to ferment carbon dioxide, carbon monoxide and hydrogen in emissions from steel mills and oil refineries, generating ethanol during the process.

The new plant will be built on Guizhou Jinyuan’s ferroalloy mill, using waste emissions from the mill for ethanol production. The plan calls for 10 facilities to be constructed over several years and will cost about $750 million.

Having 10 such plants would cover a fifth of China’s roughly 3 million-ton annual consumption of fuel ethanol. 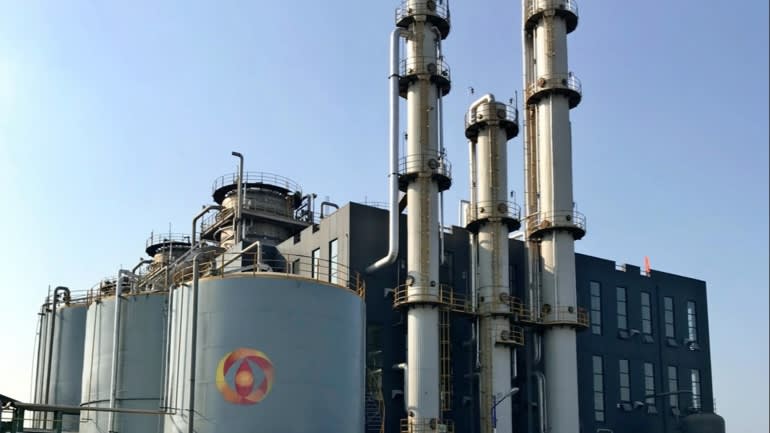 A waste gas to ethanol plant in Hebei Province. (Photo courtesy of the Chinese joint venture of LanzaTech)

The new plant will slash carbon dioxide by 200,000 tons a year compared with reusing heat from emissions for electricity generation, the companies say. The planned facility will help cut a quarter of emissions from Guizhou Jinyuan’s ferroalloy mill.

A similar mechanism can be used for oil refineries, which emit large volumes of carbon dioxide. LanzaTech opened a commercial facility in Hubei Province ahead of the trilateral partnership and will share operational know-how.

Mitsui’s ethanol endeavors in China are spurred by Beijing’s pledge to curb pollution. While the government has dropped a nationwide mandate for gasoline containing 10% ethanol, which burns more cleanly, it is still encouraging use of the blend, known as E10. State-run oil majors, such as China Petroleum & Chemical, are ramping up ethanol purchases.

Given that corn is used as the feedstock to produce the majority of fuel ethanol in China, the ethanol-gasoline mixtures are promoted in areas such as the northeastern part of the country, where corn is a major crop. But corn for fuel is in short supply, and the 10% blending target has yet to be met.

However, Guizhou Province, where a new plant will be built, is mountainous and lacks ethanol production capacity today, making it a promising market, Mitsui and its partners say. Success of the new business hinges on building a relationship with the provincial government to promote ethanol-blended gasoline and cultivate buyers.

Fuel containing ethanol is widely used in the U.S., a leading corn producer. Some states require E10 or E15 blends.

China accounts for 7% of global ethanol consumption, according to data from sources including the Organization for Economic Cooperation and Development, making it a market with strong growth potential. In China, the cost of manufacturing ethanol from waste emissions is “about the same as producing ethanol from corn,” said a Mitsui official. The province is home to many steel mills, enabling the new plant to secure large quantities of gas emissions.

Mitsui also hopes the project will win a thumbs-up from investors who focus on the environment, social responsibility and corporate governance.

Growing global momentum for zero carbon emissions is forcing companies that rely on coal, oil and other environment-harming fuels to rethink business portfolios. Mitsui, which generated 60% of its fiscal 2019 net profit through natural resource businesses, the highest among Japan’s big five trading houses, has sought to develop more operations involving ethanol and hydrogen in the medium- to long-term.

Ethanol produced with LanzaTech’s technology is seeing wider applications, including as jet fuel used to deliver a Boeing jetliner to All Nippon Airways parent ANA Holdings in 2019. Mitsui looks to expand fuel ethanol applications beyond automotive purposes and also bring the renewable fuel to other markets such as India and Europe.

What Is Prescribed Waste? 🗑️