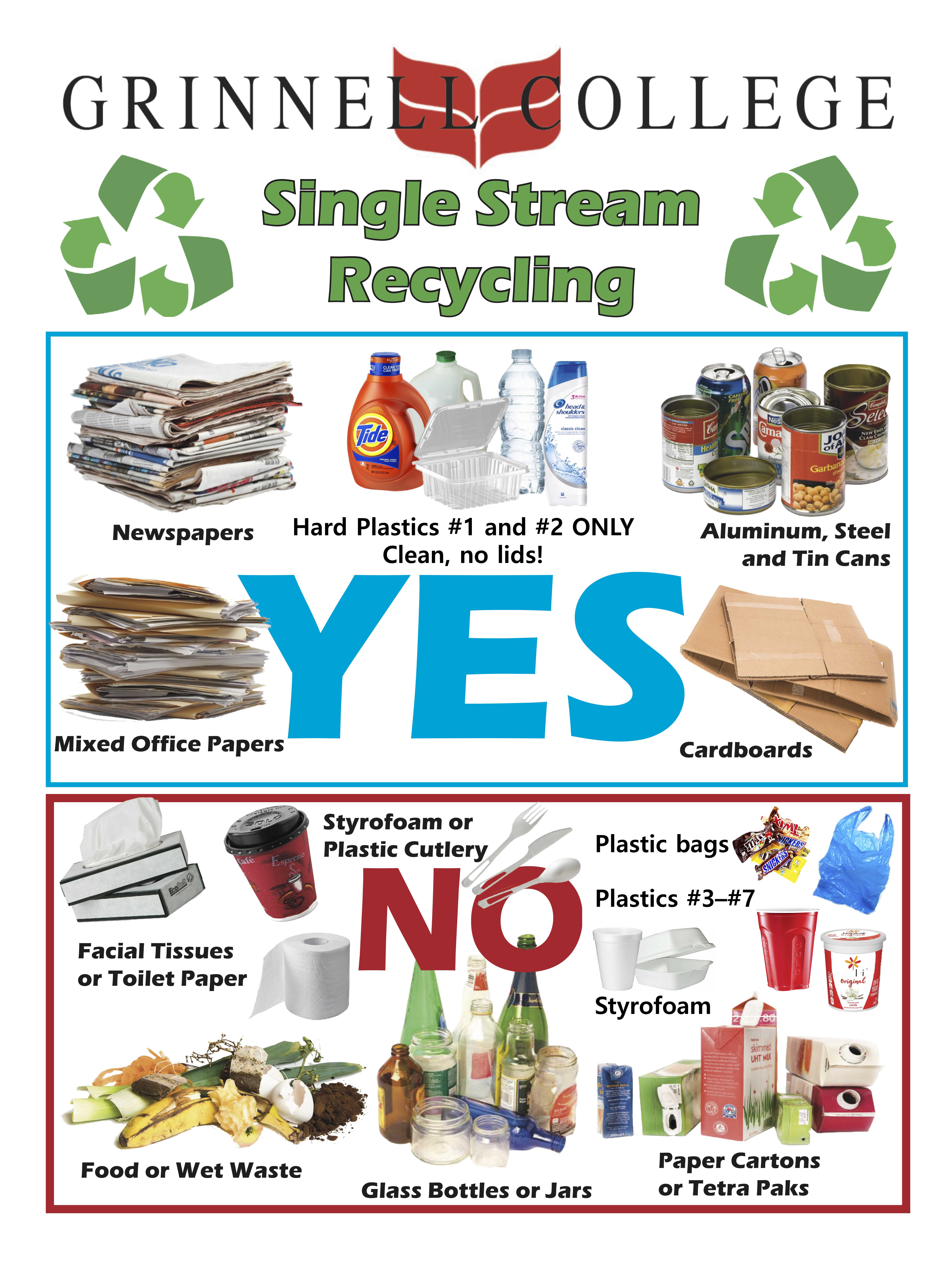 Grinnell College’s sustainability committee encourages students to be mindful of the types of the materials they are recycling. Contributed by Rachel Snodgrass.

The city of Grinnell has recently discontinued its glass recycling program, due to a lack of market demand for recycled materials. Now, with nobody to take their recycled glass, the College has followed suit.

The problem is a simple yet pervasive one, affecting mostly rural communities like the small towns dotted throughout Iowa. Glass, and other recyclables such as plastic, are not as profitable as they once used to be. As a result, recycling centers are just not willing to buy them anymore.

“The current company that we are dealing with, Republic Services, does not take glass,” said Duane Neff, the city’s public service director. If the city does send them glass with its recycling, that glass will be sorted with trash and put in landfills.

Other companies only accept glass in bulk, but according to Neff, “It would take approximately 2 to 3 years,” before Grinnell produced enough glass to meet that threshold. For obvious reasons, the city cannot safely store broken glass for upwards of 2 or even 3 years.” Other options are just too costly. “Until someone comes up with something easier or better, that’s probably what is going to continue to happen with glass,” concluded Neff.

The fact is that it simply costs too much to recycle glass. This is especially true for small communities that are far removed from major recycling centers. The center nearest to Grinnell, Republic Services, is located in Cedar Rapids. High shipping costs and low returns are behind many of the recent changes to Grinnell’s recycling policy, such as switching back to single stream recycling and ending curbside pickups.

Initially, the College’s GreenFund group, which is part of SGA, set up glass-specific bins around campus to provide a place for students to put their used glass items. If glass becomes mixed in with a bag of regular plastic or paper recycling it contaminates it, and that bag must be thrown out.

“It was a really cool project, and we actually decided to expand it,” said Rachel Snodgrass ’21, SGA sustainability chair as well as head of GreenFund, “We passed that budget, but before we ordered the [extra] bins we found out the city was discontinuing glass recycling.”

For about a year, the city of Grinnell collected glass at an on-site facility just outside of town. This was a response to the loss of a long-time distributor in Des Moines, which did recycle glass, and the subsequent switch to Republic Services, which does not. This is where the glass recycled at Grinnell College ended up. The hope was that the city would eventually find a distributor to take the glass, but that never happened. Eventually it was just thrown away. This has left Grinnell College at a crossroads, as a school that prides itself on sustainability, but is not currently able to recycle one of its major waste products.

“Whatever the city does, that’s what the campus does,” said Chris Bair, Grinnell College’s Environmental and Safety Coordinator. “We don’t have the ability to find our own recycling markets or do any of our own sorting.”

Even normal recycling has gone up in price. Where the college used to get its recycling disposed of and hauled for free, it must now pay the city $160 a ton. “Even still,” says Bair, “We’re fine paying that, because we want to continue to recycle. But that’s how things have changed so drastically.”

The recent downwards trend of the recycling market might come as a surprise to some, but the writing has been on the wall. “Glass, even though it’s easily recyclable, rarely was because it was all mixed,” said Bair. “The Budweisers of the world only want brown glass, Heineken only wants green glass … We’ve been thinking it’s been more environmentally sound than it is,” he also added that, “even before the bottom up market, plastics were only used one more time. Then they were thrown away.”

At the moment, the best thing for students to do is be mindful of their recycling. They should rely on the instructions posted above recycling bins, and if in doubt over whether something is recyclable or trash, they should err on the side of trash.

As for glass, Rachel Snodgrass says “[We recommend] that students just throw out their glass, because if it goes into single stream recycling, that whole bag has to be thrown away.”

LETTER – District should encourage recycling, not make it more difficult...

Does La Jolla have fewer homeless people since our recycling center...

More than 5,000 tons of modules collected for recycling in France...