Tymesen submitted a resolution to City Council Tuesday night to urge extending its single stream recycling agreement with Coeur d’Alene Garbage through June of 2021, pushing the contract into what will be its fifth year with the Post Falls company. Council voted to approve the measure and extend the deal.

The decision both extends the contract to the end of June 2021 and adjusts the city’s responsibility to Coeur d’Alene Garbage. The city spends an average of $18,901 each month from its sanitation fund to process an average of 174 tons from single source curbside recycling, though that cost has, at times, reached just shy of $22,000. The new fee structure with Coeur d’Alene Garbage will up the city’s responsibility by $20 per ton after the first ton but will be capped at no more than $25,000. Should the city exceed $20,000 in three straight months, a provision in the amended agreement will allow both sides to re-evaluate the arrangement.

Visitors and residents alike have noticed a commitment to reduce waste, both in households and around the parks and public spaces in Coeur d’Alene.

“I’ve noticed a lot of people who come to the parks have been packing out their trash,” said Coeur d’Alene’s Louise Branchard, who walks City Park twice a day. “Even though there’s garbage cans they can use, I’ve noticed more and more that people are leaving less of a mark around town. I think people realize we want to keep our city clean and take care of the place where we live. It’s been nice to see.”

Despite living less than a mile from the shores of Liberty Lake, Wash., Dan Huron takes his 8-year-old son to Coeur d’Alene every chance he gets and has for the past five years. He said he remembers seeing garbage cans overflowing with trash to untenable conditions, but people are getting cues that the town has made a rejuvenated commitment to keeping trash low.

“Nobody really has to tell us anymore,” Huron said. “They used to. But now we try to take whatever we bring and recycle what we can. It’s one of the reasons that we love coming here.”

Sandra Harkin said it took her a while to figure out exactly what could and could not be recycled, and that she had always tried to recycle pizza boxes, a material on the prohibited list.

“I live off East Sherman for, gosh, 10 years now? Twelve?” she speculated. “Mine used to be one of the only driveways with a recycle bin out front. Now, just about everybody on my street recycles, and I think it shows. We have … a lot more pride about it, in my opinion.”

With recycling essentially being treated as a commodity that rises and falls with market conditions, single stream curbside recycling has not produced consistent revenues that pays for itself in almost two years, this after China stopped accepting bulk recyclable waste starting in 2018. Once able to mostly pay for itself, single source recycling across the country has become a baked-in cost to municipal residents, including here in Coeur d’Alene. It’s the driving force, Tymesen told the council, that is keeping most cities — Coeur d’Alene included — from locking down a long-term solution.

Neither Coeur d’Alene Garbage nor Waste Management, Inc., responded to requests for comment for this story. Tymesen stressed the most effective way to trim the city’s recycling costs is a community effort to more efficiently recycle.

“I’m hopeful we’re not going to pay any more money, depending on the commodities market,” he told the council. “Right now, the trend has been good, where the recyclables have a little bit of value … The cleaner that our recyclables are, the better our cost is, because they can use more of that product.”

“When you do clean recyclables,” Anderson added, “and you wash out that yogurt jar down your drain, it comes to the wastewater plant, and we turn it into compost. So feel good about what you’re doing.” 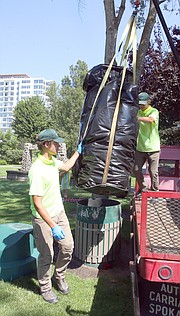 Solar panel recycling has a long way to go, and silicon...