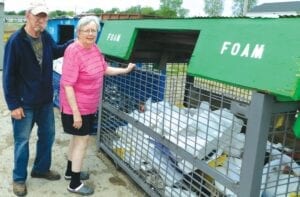 Pandemic or no pandemic, Jim and Nan Bradley regularly make the trip from their home in Deckerville to deposit recyclables in these outdoor receptacles at the Sanilac Recycling Center in Sandusky. Photo by Steven Kovac

JoAnn Bye, director of the Sanilac Recycling Center, wants the public to know that the facility is open for business 24/7 despite a shortage of workers.

“Complications from the pandemic have really affected our labor force,” said Bye in a telephone interview with the News. “On a normal Monday we have 11 workers. Two weeks ago, I had two. We are operating most of the time down seven people.

“Many of our workers come from Creative Industries. Several live in group homes. These are vulnerable people. To protect the homes from the spread of infection, they aren’t coming to work. Many of our workers don’t drive, and due to the pandemic, the bus system stopped. I lost one employee over health concerns he had for his wife.”

“Citizens have been using their time at home to clean their garages. That’s why our stats have not gone down much,” said Bye.

Jill Greenberg, a spokesperson for Michigan’s Environment, Great Lakes, and Energy Department (EGLE) concurred, telling the News, “Recycling is definitely happening across our state despite the pandemic. Some county centers temporarily suspended operations to regroup, but most facilities have remained operational through the virus crisis.

“Recycled materials are essential because of COVID. We help to support the supply chain for the manufacture of things like masks, gowns, and face shields. Even toilet paper is mostly made from recycled paper,” said Greenberg.

With volumes only slightly lower, and because of some changed processing practices necessitated by COVID, Bye said, “It got to the point where so few workers could not handle what we were taking in.

“We were also getting backed up because we have taken to letting full containers sit for a week to allow any contamination from the virus to die,” said Bye.

“As I told the county board of commissioners, it’s either close up or hire somebody.”

Bye said that it was suggested by county officials to try temporarily pulling our remote-location containers out of Marlette and Worth Township to help cut down on our intake until we could hire some people.

“We pulled them,” she said. “And the landfill voluntarily gave up its recycling container and brought it back. Guess what happened? People are driving up to the center to drop off their recyclables. We’ve gone from an average of 100 cars a day to 150 cars per day now.”

“It is a sanitation problem and makes sorting very slow and unpleasant,” said Bye. “Normally, it takes us from six to eight hours to process a roll-off container. Worth Township’s containers have been coming in so dirty that it is taking us 12 to 16 hours to process one of them.”

Reflecting on the increased popularity of recycling, Bye noted, “Of all the county departments and services, more people are touched by recycling than just about anything else. We have more residents using our service more often than most other county services,” she said.

“Our last millage renewal passed with about 75 percent of the vote. It costs only around $8 per year per household for our service.”

Greenberg commented, “In the year leading up to the pandemic, recycling volumes were going up across Michigan. Public awareness is up. And people are doing recycling better. They are properly storing their materials and emptying and rinsing them before putting them into the bins.”

Bye said she is in the process of interviewing several potential new employees.

“I want to emphasize to the people of Marlette and Worth Township that the pulling of their roll-off recycling containers is temporary. It won’t be too long before they are put back,” said Bye.

The Sanilac County Recycling Center is an “open campus” facility, which is accessible by the public 24 hours a day, seven days a week. It is located at 150 Orval Drive on Sandusky’s east side.

Stunning photos of purses, handbags made of recycled materials

A whole bunch of great recycled and repurposed sewing tips –...