Duke Energy is constructing a coal ash recycling unit on the property of its former Cape Fear plant in Moncure with the goal of excavating the coal ash in basins there, helping it meet the state-mandated basin closure deadline and providing another use for the discarded ash.

The facility will “extract excess carbon from coal ash to be suitable to be used in concrete,” according to Bill Norton, a spokesperson for Duke Energy.

The excess carbon in coal ash “strengthens concrete” to be used in the construction of high weight bearing bridges and highways.

“The neat thing about this technology is that the extra carbon [from the coal ash] actually powers the facility,” Norton said. “Coal ash is the fuel that helps take the excess carbon out.” 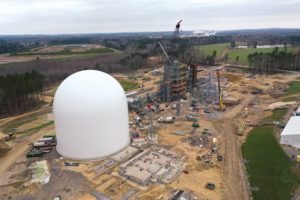 Construction is under way in Moncure for a coal ash recycling plant that will process the coal ash basins at Duke Energy’s Cape Fear plant. (photo via Duke Energy)

The facility, which should be completed by December, uses STAR technology created by the SEFA Group. That company that has specialized in coal ash recycling for 40 years and is one of three of this type of facility the company is building in North Carolina to adhere to the state’s mandate to excavate coal ash pits in the state.

The facility will only process the coal ash in the basins at the Cape Fear facility, estimated to be 5.8 million tons. Crews will only work on portions of a single coal ash basin at a time. If there are rains that make contact with the ash, the water is considered “contact water” that must be treated to adhere to the state permitting requirements for basin outfalls. The facility will likely be in use until 2035 to process all the coal ash at the location.

The coal ash processed is about 20-25 percent moisture, according to Norton, which will be the “waste” from the process that is released into the air as steam through stacks. According to the N.C. Dept. of Environmental Quality’s Division of Air Quality, the plant’s permit “requires the facility to demonstrate compliance with air quality regulations via source testing (oxides of nitrogen and particulate matter emissions) and continuous emission monitoring (sulfur dioxide emissions).”

The stacks are being constructed with “scrubbers” that will remove the hazardous compounds with readings from the stacks to be reported to the state in order to maintain compliance with the air quality permit the facility holds.

However, air quality regulations applicable to the STAR facility require no ambient monitoring around the facility, according to NCDEQ’s Division of Air Quality. The county will be monitoring the state reporting from the facility and “will respond as necessary to ensure that appropriate controls are in place and functioning to protect the public,” according to Chatham County Manager Dan LaMontagne.

The cost to construct the site is approximately $240 million, but Norton notes that the cost is tempered by the ability to sell the recycled coal ash, making it cheaper than “landfilling” the ash. Those sales will then “offset” costs when calculating rate increase requests to the state’s Utilities Commission.

“We are looking forward to having the new plants online,” said Jim Clayton, COO of SEFA Group. “We are excited to get material into the marketplace.”

This is a rendering of what the completed coal ash recyling plant, currently under construction in Moncure, will look like. The coal ash processed here will be sold to concrete manufacturers as an additive to improve strength. (photo via Duke Energy)

Chapelboro.com has partnered with the Chatham News + Record in order to bring more Chatham-focused stories to our audience.

Wastewater disposal and recycling legislation backed by alliance – The Journal...

Do You Know Which Recycling Equipment Is Best for Your Business?

Turn your cans in to Moscow Recycling for more money this...