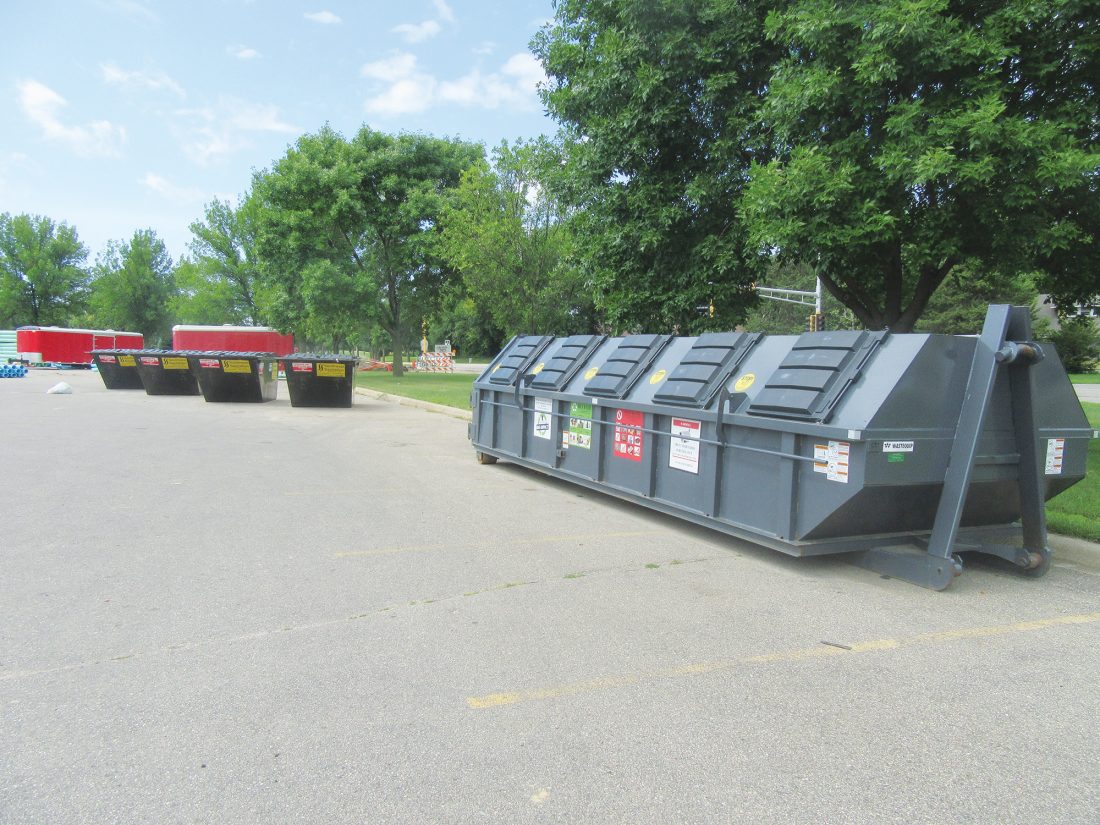 Roll-off recycling containers outside the former County Fair in Marshall are some of Lyon County’s most used. But while the bins have signs about what materials can’t be recycled, and the site is under regular surveillance by county staff, a growing amount of trash is still being thrown away here, Environmental Administrator Roger Schroeder said.

“We’re getting more and more garbage, and hazardous waste,” Schroeder told members of the Lyon County Board Tuesday. Some of the items that county staff have found in the roll-off containers outside the old County Fair included a gas fireplace and a few yellow hazardous waste bags marked “infectious linens.”

Schroeder said the bags were probably the most concerning thing to be dumped in the bins, especially during the COVID-19 pandemic. So far, there haven’t been many of the hazardous waste bags found, so they might be from home use, he said. But in the long term, the county would need to address residents improperly dumping waste at recycling locations.

At this week’s county board meeting, Schroeder and county commissioners discussed ideas for better security at recycling sites.

If dumping trash at recycling sites continues, “It’s just going to ruin it for everyone else,” said Commissioner Steve Ritter.

“It can get to the point where we need to end it,” Commissioner Gary Crowley said of the recycling sites. “People need to respect the rules.”

While people throwing away non-recyclable items at recycling drop sites is something that has sometimes happened since the county’s new bins were put out early this year, “It’s getting to be a pattern,” Schroeder told the Independent Wednesday. Schroeder said Yellow Medicine County has also seen more non-recyclable trash dumped at its recycling locations in Granite Falls and Canby lately. Of the locations around Lyon County, the former County Fair recycling site in Marshall has been one of the worst for dumping non-recyclable trash, he said.

“Probably the biggest thing we see is unawareness,” Schroeder said. People will assume all plastic is recyclable, when some kinds aren’t. Lyon County collects the kind of plastic used in many food containers, but not the kind that things like children’s toys and flowerpots are made from, he said.

Schroeder said county staff have worked to educate area residents about the recycling program, through radio spots and other methods. County staff also regularly check on the recycling sites. However, on Tuesday he and county commissioners discussed whether stricter surveillance and enforcement was needed.

One possibility, Schroeder said, might be to move the Marshall recycling site out near the Lyon County fairgrounds. The location would be closer to the county environmental office, and it might be easier for staff to keep an eye on, he said.

“The very first day in Canby, they caught someone,” Schroeder said. The downside of using cameras in Marshall, however, is that they would be hard to hide in a more open spot. Moving the roll-off bins to the fairgrounds probably wouldn’t work.

Schroeder said he needed to talk to the landowner of the recycling site before the county could put any cameras there.

In the meantime, Schroeder said it’s important for area residents to follow the rules of the recycling sites. The roll-off containers at the Marshall site have signs on them with pictures of materials that don’t belong in the bins. More information on the Lyon County recycling program, including recycling drop-off locations and what kinds of plastic and paper can be recycled, is available online at https://www.lyonco.org/departments/environmental/residential-recycling.


Today’s breaking news and more in your inbox

Book Review- Turn This Book Into a Beehive – Recycled Crafts

How To Build A Recycled Plastic Skateboard? Designer Giving Away Plans For Free

Charlotte Talks: What Questions Do You Have About Recycling?