Welcome to the weekend! I’m Winston Gieseke, philanthropy and special sections editor for The Desert Sun in Palm Springs, bringing you the latest goings-on here in the Golden State.

In California brings you top Golden State stories and commentary from across the USA TODAY Network and beyond. Get it free, straight to your inbox.

More than 3 billion plastic bottles per year end up in California landfills or as litter. (Photo: stock from needpix.com)

Gov. Gavin Newsom is on an environmental roll. Earlier this week, he issued an executive order that will ban new gas-powered vehicles from being sold in California, beginning in 2035, and now he has signed a “first-in-the-nation law requiring plastic beverage containers to contain an increasing amount of recycled material,” according to The Mercury News.

The goal is to reduce the huge amounts of plastic littering our oceans, roadways and other parts of the state.

“This is the most ambitious, aggressive recycled plastics content law in the world,” said Mark Murray, executive director of Californians Against Waste, a Sacramento-based environmental group.

The bill, AB 793, follows a progression of mandatory recycling that has been implemented in the state for other materials. California currently requires glass bottles sold in the state to contain 35% recycled material; newsprint must be 50% recycled.

According to the Mercury News article, 12 billion plastic bottles are sold in California every year. And while approximately 70% of these are recycled, there are still more than 3 billion bottles that are not recycled at all, according to state statistics. Many of these end up in landfills or as litter in the outdoors. 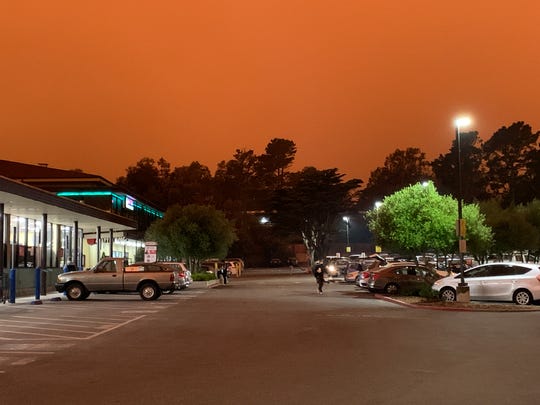 The parking lot of a Safeway supermarket in San Francisco’s Diamond Heights neighborhood on Wednesday, September 9, 2020 at 11:15 am. The reddish-orange tinge to the sky is from multiple wildfires in the region. (Photo: Elizabeth Weise)

If you’ve been hoping for relief from wildfires, you will likely be disappointed. There have already been 8,000 wildfires in California this year. Starting this weekend, much of California will be at a greater-than-usual risk for more fire, meteorologists say.

Fire weather watches are in effect for this weekend throughout most of NorCal, and watches are expected to be issued for parts of SoCal next week when temperatures return to the triple digits.

The heat is expected to reach 100 degrees in places along the Sacramento Valley floor and inland Southern California and up to 110 degrees in desert regions. That dry weather could feed wildfires that are already burning, including the August Complex in Mendocino County, the SQF Complex in the Sierra Nevada Mountains near Visalia and the Creek Fire near Fresno.

“The outlook predicts warmer-than-average temperatures through November and little precipitation,” said meteorologist Alex Tardy at the National Weather Service in San Diego. “[Conditions] remain critically dry and sensitive to any wildfire starting at [this] time.”

Fire weather risk is currently extreme, he said, and will likely stay that way as we move into fall. 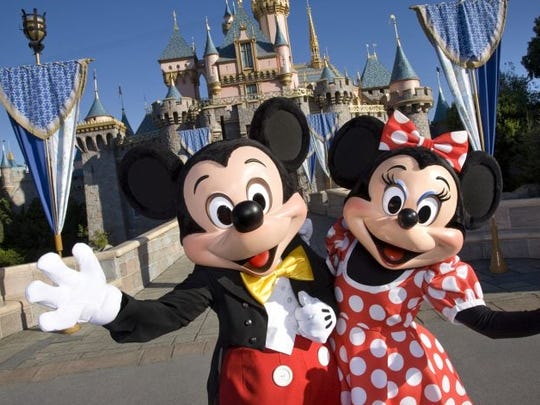 It’s been a while since Mickey and Minnie Mouse have greeted guests at Disneyland. (Photo: Disneyland)

It seems Disneyland is currently not the happiest place on earth. In fact, it may be among the most frustrated, seeing as how it’s been closed since the middle of March, causing significant financial issues for both the park and the City of Anaheim.

On the financial front, the Orange County Register reports that “Anaheim’s budget deficit has risen to $100 million and the city’s unemployment rate has risen to a historic high of 15% since Disneyland closed.”

But you know what happens when you wish upon a star … On Sept. 16, Gov. Newsom said an announcement on California theme park reopening guidelines would be coming “very, very shortly.” Hakuna Matata!

Here’s how to care for your kids during the pandemic. (Photo: Getty Images)

California has the highest number of cases of coronavirus in the nation — 800,000— according to the Los Angeles Times. Which is not all that surprising, given that we’re the most populous state, with about 40 million people. The Golden State makes up 12% of the U.S. population, but only 11% of cases nationwide.

California has had around 15,000 deaths. Our death toll, though, is lower than states with smaller populations. New York, for example, has reported more than 33,000 coronavirus deaths. Texas was reporting 15,267 fatalities as of Wednesday. New Jersey has reported more than 16,000 coronavirus-related deaths. Florida on Friday surpassed 14,000 deaths.

Are you looking for work in the Bay Area? Competition is eight times what it was in January. According to The Mercury News, for every one job opening in the San Francisco metro area, there are 11.4 people vying for it, which is considerably more competitive than it was at the start of the year when the Bay Area had one of the best economies in the world.

Two earthquakes rocked the Coachella Valley in SoCal on Friday morning — a 3.0 magnitude followed by a 3.6 magnitude — within minutes of each other. Both were centered 6 miles east of Desert Hot Springs, just outside Palm Springs. No additional temblors or aftershocks have been reported — nor, thankfully, has any property damage or injuries.

Have a great weekend! More California news on Monday.

In California is a roundup of news from across USA Today network newsrooms. Also contributing: Los Angeles Times, The Mercury News, The Orange County Register

City could be on the hook for $3,000 monthly recycling fee

The mathematics of heavy hauling

How Fabric Gets Recycled