The findings presented in the white paper come from three different studies, with each study using a different material. Elementum states that the introduction of its patented Reactive Additive Manufacturing (RAM) technology allows for a wide variety of materials not typically additively manufacturable by Laser Beam Powder Bed Fusion (PBF-LB) to be processed.

Along with bringing new materials to the market, parts produced by RAM technology are said to have equivalent and improved mechanical properties compared to traditional wrought alloys.

RAM technology uses micron-scale additives blended into powder feedstock that react in-situ during Additive Manufacturing to form sub-micron inoculants. These inoculants lead to grain refinement, and reportedly contribute to eliminating defects like hot tearing in aluminium, a hurdle for many alloys in AM.

The reactive process of the RAM material, with dissolution of the reactive additives in the melt and reprecipitation of the products as sub-micron inoculants, occurs during Additive Manufacturing and encourages homogeneous distribution of constituents in the final product.

Elementum explains that it has seen interest from consumers in powder recycling, and using the company’s alloy feedstocks for PBF-LB for multiple builds. In response, Elementum performed three studies on three different RAM materials.

Powder recycling is economically and environmentally beneficial, increasing the number of builds that can be performed with the same feedstock and reducing material wasted per build. Powder processing also allows the blending of multiple components for the production of materials like metal matrix composites (MMCs).

However, there are concerns about the physical and chemical changes that may occur under processing conditions in PBF-LB, along with concerns around components segregating during handling.

Despite these concerns, many alloys have been shown to retain their chemistry, particle size, morphology and mechanical properties after multiple builds with the same powder. Powder processing also provides improved homogeneity in multi-component materials (e.g. MMCs) compared to liquid processing, where dendritic solidification and agglomeration of added particles encourages segregation.

Elementum conducted three different studies of its A6061-RAM2, A2024-RAM2, and IN625-RAM2 materials, respectively, and reports that it was able to confirm that its materials “stand up to the challenge.” The powder processing technique used buy the company also allows for larger, safer particle sizes for storing and handling that form the beneficial sub-micron reinforcements during Additive Manufacturing.

For this study, the company emulated a ‘worst-case scenario’: segregated particle constituents. Smaller, higher-density particles tend to settle to the bottom with time or movement; for example, in a jar filled with material of varying sizes like sand, pebbles, and rocks, finer materials (sand) tend to settle at the bottom, while larger materials (pebbles and rocks) stay in relatively the same place.

While Elementum’s multi-component powder mixtures aim to minimise this by using similar size matrix and additive particle sizes and relative densities, the company wanted to ensure segregation did not occur through multiple handling cycles and builds.

The company took used powder from a build and sieved it twenty times consecutively with no re-blending. Powder was consistently fed into the sieve from the bottom of a collection bin to maximise component segregation.

It performed two additional builds: one using the top of the final powder blend and another using the bottom half of the powder in the bin. This was then followed by tensile testing each part. The results showed consistent performance by Elementum’s powder, even with handling that encourages component segregation.

Along with a development partner, the company ensured the maintenance of particle size and chemistry after multiple builds in an SLM 280 Additive Manufacturing machine with a powder supply unit (PSV).

After multiple builds using A2024-RAM2 powder over five months and seventy sieving cycles, without refreshing with new powder, Elementum’s material was said to have a similar particle size range to new powder, and preserved chemistry that was in-spec.

The company states that this confirmed its material’s ability to maintain consistent strength and remain well-mixed over multiple builds, with the same particle characteristics as new powder.

Students at Colorado School of Mines (CSM), Colorado, USA, performed a study on Elementum 3D’s Inconel 625 nickel alloy with 2% ceramic reinforcements (IN625-RAM2). Evaluation was based on tensile properties of bars and impact energy of Charpy specimens built with recycled powder.

Following the first build with new powder (labeled 0 in the figures below), the used powder was topped off with new powder to maintain 25 kg for each build. The mixture was tumbled for ten minutes to ensure proper blending. This was done for each of nine builds (eight reuses) performed on an EOS M290 PBF-LB Additive Manufacturing machine at Elementum 3D.

Both were higher than those reported for wrought plate of the same material according to the manufacturer’s data sheet (827-1103 MPa for UTS and 414-758 MPa for YS). Charpy specimens were also found to have similar impact energy up to the final (eighth) reuse.

These samples showed consistent values in both strength values across multiple builds. Each data point represents an average value for multiple specimens and the error bars shown represent one standard deviation for that sample set.

Each study conducted by Elementum 3D was said to have explored and confirmed the quality and performance of its powder feedstock over multiple builds. The resulting consistency of mechanical properties and powder characteristics helped the company to assure its customers of the resilience and reliability of its materials.

The reusability of Elementum 3D’s feedstock reportedly stems from its use of reactive powder design using micron-scale reactive powders to achieve sub-micron products that act as grain refiners. The similar size and relative density of these additions and its matrix alloy powder are believed to prevent segregation even after multiple cycles of powder handling and sieving. 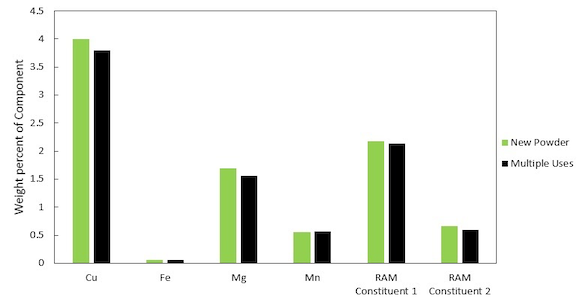 IDEM Calls For Proposals To Study Impact Of Recycling On State...

Creating a ‘me space’ on board with a recyclable solution