Cigarette butts are undoubtedly one of the biggest problems for litter: 4.5 trillion filters are tossed onto the ground worldwide, and they remain the most littered item in the U.S. Yet, while statistics show people are smoking less – or at the very least, turning to vapor products from e-cigarette companies like JUUL – the cannabis industry is alive and growing. So are its problems with marijuana-based waste.

From Keurig brand K-Cups to plastic straws, these ubiquitous products pave the way for faster, cheaper and easier consumption. Enter the strain-based vape pen: arguably one of the most popular ways to “smoke” weed. It’s perceived to be a safer alternative to smoking, but the jury is still out when it comes to hidden additives that could be in vapes. At any rate, it’s much easier on the respiratory system.

The reason most people turn to strain-based vape pens seems to be simplicity: you buy a pen and choose a cartridge that suits your preference for size and strain. Then, you vape it as frequently or as sparingly as you want. When the cartridge runs out of oil, you buy a new one.

4/20 in 2020: presidential candidates’ views on marijuana

“Vape pens are here to stay,” Ryan Miller, former director of operations at vape pen manufacturer OMG Farms, said. “People really like the convenience of the product, but the biggest criticism has been that they’re ‘disposable’ and there isn’t any infrastructure around recycling them.”

‘The biggest criticism has been that they’re ‘disposable’ and there isn’t any infrastructure around recycling them.’

OMG Farms, which was later acquired by CaniBrands, previously had collection boxes at participating dispensaries so people could recycle their old vape pens. But Miller told GreenState, when new regulations began in 2018, dispensaries were no longer able to collect the used products.

KNOW YOUR CANNABIS DISPENSARY MENU: What are extracts?

Alex Traverso, chief of communications at the California Bureau of Cannabis Control, said that current regulations don’t prevent these collection boxes. However, they do leave dispensaries with the responsibility of “damaging out” used vape cartridges, or destroying them in accordance to waste regulations, so that they can be recycled. This process can be challenging and unsafe for workers.

So, when it comes time to throw away your vape cartridges, where should they go?

GreenState has all of your questions covered about vape cartridge disposal, for both cannabis and tobacco. Turns out, some variations of that simple little pen might be more of a risk to the environment than you think, but there are measures being taken to resolve the issue. 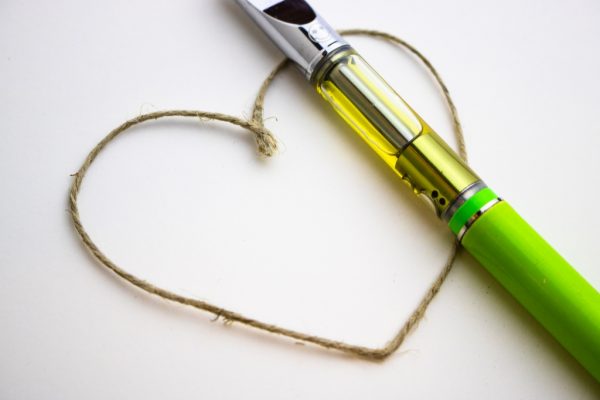 Can I recycle my cannabis strain-based vape cartridges?

Currently, no, and there are a few different reasons for this. Strain-based vape pens consist of a variety of materials: usually glass, aluminum and a lithium ion battery. Because our current recycling system lacks the ability to break down multi-faceted materials – namely, the glass in the cartridge would break before anything else could happen – waste management will take it to a landfill.

“If it’s hard to separate, we don’t have a machine that can magically do that for us,” CalRecycle information officer Lance Klug said.

Furthermore, vape cartridges have that tiny bit of oil left that can no longer be inhaled. The oil isn’t easily removed, and its residue would interfere with the chemical process of recycling. Because of this, most vape pens and their cartridges are considered e-waste, similar to batteries, printer cartridges and fluorescent light bulbs.

Klug recommends collecting what you have over a period of time, and taking the cartridges and pens to a hazardous waste facility near you to see what they can do. Some convenience stores like Walgreens, at the very least, might provide battery disposal options. 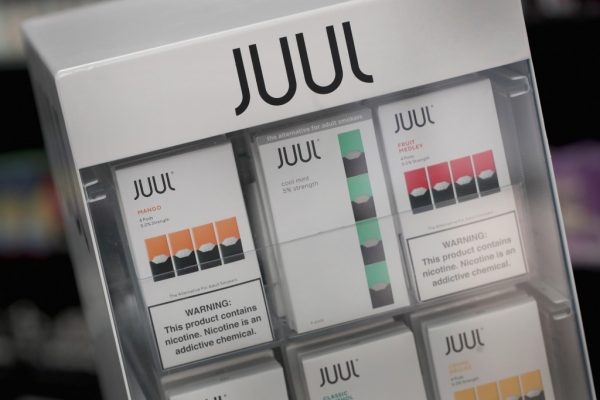 Can I recycle my JUUL pods?

The JUUL pen consists of two components: the e-cigarette, where the battery and temperature regulation system is positioned, and the removable pod containing nicotine e-juice. As with cartridges for strain-based vape pens, the pods are a growing problem. While e-cigarettes might be perceived as a more sustainable option in comparison to traditional cigarettes, the lithium ion batteries and the juice from the pod are toxic and require them to be disposed of in a landfill.

The batteries in JUUL pens were once able to be recycled through Green Smoke, another e-cigarette company, but it has since shut down. Yet another company, Mistic, offered a similar trade-in recycling program, but its website says it’s no longer offered. When asked whether JUUL was working toward a a related incentive, the company did not respond to GreenState’s request for comment.

Are there any recyclable e-cigarettes out there?

Companies like TerraCycle provide Zero Waste Boxes for people to take matters into their own hands and recycle e-cigarettes at their home or office. TerraCycle collects discarded e-cigarettes using purchasable waste boxes, ranging from $47 for an individual pouch to $1,640 for a much larger pallet, typically used by several people over time. The user, or users then ship the disposed e-cigarettes to the company, and the collected waste is mechanically or manually separated into metals and plastics and later melted to be recycled. While some people might be discouraged from buying their own waste box for financial reasons, the company is working with a variety of brand partners to make their recycling solutions available for free to everyone.

POSSIBLE DANGER: A Sonoma man reportedly suffered third-degree burns on his leg after an e-cigarette spare battery detonated inside his pants pocket

Yet, some e-cigarettes out there can be recycled on one’s own after the remaining nicotine is washed out from the filler. Unfortunately, this can be unsafe, as liquid nicotine seeping into the skin can have dangerous consequences. As for the lithium ion battery and atomizer (the part that controls the temperature of the e-cigarette), you’ll need to go to a special electronic recycling facility.

So, while it is ultimately possible to recycle parts of an e-cigarette, it’s not always accessible, depending on your local recycling center. And many people may be dissuaded from doing so due to lack of convenience and safety.

Are there any cannabis vape pens that are more eco-friendly than others?

“Nothing is completely recyclable on the cannabis market, but there are ways to help prevent all of it from going into the landfill,” cannabis sustainability adviser Mitchell Colbert said.

He suggested cannabis brand Dosist’s unique “dose pens.” They’re designed differently than strain-based vape pens in that “as many of the components as possible can be fully recycled, reused or repurposed,” according to its website. On top of that, the company also offers a rewards-based recycling program in conjunction with Gaiaca, encouraging customers to return a used dose pen for a $5 discount on their next pen. The company will then pick it up and recycle the materials.

Colbert also recommended using refillable vape pens, even though they’re more expensive than the cheaper strain-based vape pens beginners tend to use. “You’ll save money in the long run and they tend to be better quality,” he said.

Refilling is also easier than most people think: most pens with refillable tanks have a filler hole, which you can transfer additional oil into using a dropper. There are several varieties on the market, from the Cora Vaporizer, which features a magnetically attached refillable tank, to the Vaporite Amber L, which also has a refillable tank with customizable coil options. Best of all, these pens mean fewer trips to the dispensary for you, and fewer vape cartridges going into the landfill.

How can I use some of my old containers if I can’t recycle them?

KaringKind is glad you asked. The Colorado-based recreational marijuana dispensary recommends a few different ways to creatively repurpose glass cartridges, syringes and dab jars. They suggest using larger containers to hold miscellaneous office supplies or vitamins, for example, and even keep loose change secure. Smaller glass dab jars can be filled with chapstick or moisturizer, store dry teas, pack a single-serving of salad dressing for an on-the-go lunch. If you’re a creative type, apparently they’re great for holding glitter and other craft supplies.

They can also make for some innovative home décor. KaringKind says plastic eighth containers are ideal for small plant pots or candle votives. If you just want to get rid of what you have, many charities and local businesses can put empty, sanitized childproof containers to good use. Simply soak the jars in warm, soapy water and peel off the label. Then, use a toothbrush or other small tool to clean off any oil or residue. After that, simply rinse them off and let them air dry. They’re ready to drop off at your nearest animal shelter to carry prescriptions, a community-based art organization to hold art supplies, or anywhere else you can think of. Just be sure to call each organization first.

Is there anything being done to combat the waste issue?

In Colorado, activists have submitted an amendment to the Sunset Bill, which would allow dispensaries, distributors and cultivators to recycle their own waste. The amendment is currently awaiting a signature from governor Jared Polis, who has been a long-standing supporter for legal marijuana and the growth of the industry. It’s a significant time for that support, too – five years have passed since recreational sales began in Colorado, and the regulations supporting it are now facing a legislative review. When – and if – the amendment is approved, there are high hopes that other states, like California and Washington, will follow suit.

What else can I do in the meantime?

“Having sustainability in mind when choosing products is the most immediate thing people can do to deal with the issue,” Klug said. “If you’re a recreational user with the option to choose one product over another, then by all means, do that.”

Some medical patients may be limited to disposable strain-based vape pens. But as new policies are becoming implemented, if you’re able, consider switching to more eco-friendly consumption options like flower, which can be composted, or edibles. And consider keeping those used vape cartridges around – you never know when they might come in handy.

Have comments on this story or questions about cannabis? Send inquiries and tips to amanda.bartlett@sfchronicle.com

Recycling can extend indian river landfill for next generation

Why carbon recycling could be synthetic biology’s crowning achievement