PORTLAND, Oregon – There were nothing but smiles and cheers at a “garbage truck surprise birthday parade” this week to celebrate the third birthday of one very big garbage truck fan, Kamden Park.

When the Arrow Sanitary Service Portland team found out that Kamden’s third birthday was this week, they decided to do something a little special for him.

“Kamden’s mother reached out a few months ago, thanking us and letting us know how much Kamden looks forward to Mark’s pickups. Through that correspondence, we found out his birthday was in August, so we decided to get about a half dozen trucks together to throw the little guy a birthday parade,” said Josh Brown, District Manager at Arrow Sanitary Service

Kamden (along with close family and friends) was absolutely stunned, giggling and smiling ear-to-ear as the parade of a half dozen trucks cruised by his house – all for him. 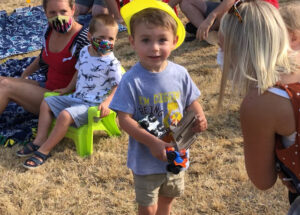 Afterwards, driver Mark gave Kamden some tiny trash and recycling truck toys, a hard hat and a t-shirt. All of it was in a 20 gallon Arrow Sanitary cart with Kamden’s name on it.

“We could all use a little bit of happy news right now and this brightened the spirits of our drivers who, as essential workers, have been staying positive while working nonstop during this pandemic,” said Brown.

ZBO) Shareholders Got Unlucky And Saw 73% Of Their Cash Evaporate...

COVID-19 has an unexpected impact on recycling | Lehigh Valley Regional...