TOKYO — Unicharm, the world’s third largest diaper maker, will turn used diapers into new ones which will come onto the market in 2022.

The Japanese company plans to introduce more than 10 facilities for diaper-to-diaper recycling by 2030, as it bolsters efforts to reduce waste.

Unicharm will begin demonstration experiments and collect used diapers initially in Tokyo. The pulp will be taken out of the diapers at its recycling facilities and turned into recycled pulp via an ozone sterilization system.

Recycling diapers used to be a complicated process, but new technology developed by the manufacturer has made it more efficient. Since 2016, Unicharm has been accumulating knowledge on recycling methods by conducting experiments in Kagoshima prefecture, southern Japan.

Unicharm’s initiative comes at a time when there is an increasing amount of diaper waste, as Japan’s population rapidly ages and diaper demand grows among the elderly. 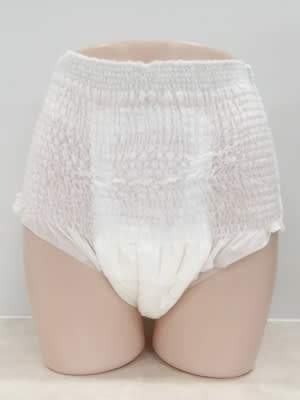 A prototype of a diaper made using recycled pulp (Photo courtesy of Unicharm).

“More people will be using diapers in an aging society and the proportion of disposable diapers in waste increases,” said Kenji Ueda, general manager of Unicharm’s environmental, social and corporate governance division. “We want to aim for recycling that enables [diaper waste] to be remade multiples times [into new diapers], not just once.”

Unicharm has the leading share of the domestic diaper market. As the country’s elderly population grows, so does its adult diaper market. In 2019, the market had expanded by about 49% from 2011 to 8.6 billion pieces, according to the Japan Hygiene Products Industry Association.

Although another diaper maker, Kao, is also working on reducing waste by producing plastic pallets, from waste generated during the manufacture of diapers, Unicharm’s initiative of tuning old diapers into new ones is seen as the world’s first direct recycling scheme.

Meanwhile, U.S.-based global consumer goods group Procter & Gamble teamed up with Italian health care company Angelini to develop recycling systems for used absorbent hygiene products, including diapers, to create new materials, including gardening substrates and specialty papers. The system has been operating in Italy and the Netherlands so far, but P&G aims to expand it to 10 cities by 2030.

Green waste recycling week is upon us » Albuquerque Journal

How to: Realistically Recycle

Why You Shouldn’t Recycle Receipts

Coffee from Berlin has a unique recycling signature • Recycling International

Fun game with stuff you have on hand – Recycled Crafts