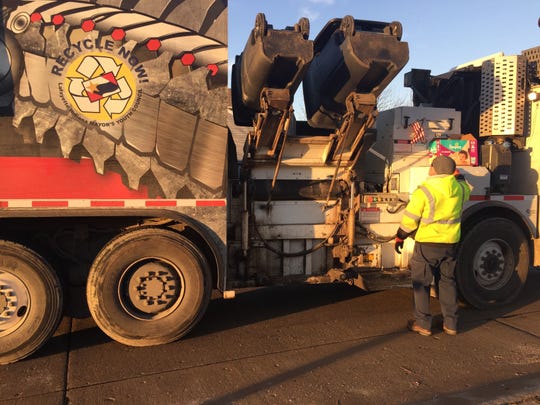 Could Lafayette’s curbside recycling program be ready for some changes? A note left at some residences in the past week made it look as if changes are coming. The city said it’s too early to say. (Photo: J&C file photo)

LAFAYETTE, Ind. – Lafayette’s future with curbside recycling is up in the air, as city officials are meeting Tuesday regarding potential changes to what can and cannot be recycled for people living in the city.

There is no clear date when results are expected to come from the study, Berryman said.

Pictures of the letter made rounds on the neighborhood community app Nextdoor and was posted on Twitter.

“Desperately trying to keep recycling free for residents, taking a closer look at all this. Stay tuned for details!” the city’s account tweeted, replying to a user who tweeted, confused about meaning of the letter. Currently, the city does not charge for trash pickup.

Desperately trying to keep recycling free for residents, taking a closer look at all this. Stay tuned for details!

The letter credits an “ever changing world” as a reason to update the recycling list. Items listed on the letter that are no longer acceptable for curbside recycling include glass, magazines, phone books and plastics #3 to #7, among other items. Berryman said these changes came from the Best Way Disposal transfer station, which handles the city’s recycling.

Here are the items that can still be recycled, as listed in the letter:

► Cardboard that is clean, dry, broken down and bundled neatly

► Aluminum and steel cans from food and beverages

Patty Payne, the director of communications and marketing for the city, said a meeting will be held Tuesday to discuss any potential changes to the city’s current recycling plan.

In the meantime, residents putting out their trash and recycling for pickup can continue to follow the city’s current policy, not the new guidelines listed on the letter.

As Lafayette ponders its curbside recycling program, Tippecanoe County has had its own issues with its dropoff sites and with what the county is willing to accept.

The county started dealing with greater volumes of aluminum, glass, paper and cardboard after a round-the-clock drop-off center overseen for decades at the West Lafayette Street Department closed May 13. West Lafayette ran the site on South River Road for the county, but the city closed it to make way for buildings to house an expansion of its trash hauling and maintenance fleet.

County Commissioner Tom Murtaugh said bills have been higher than expected with its contract with Best Way Disposal, which runs a dropoff site at its trash transfer station on North Ninth Street Road, north of Lafayette, and picks up at the county’s 24-hour sites at East Tipp Middle School, Southwestern Middle School and in Stockwell.

Murtaugh said the returns “are practically nothing” today. He said corrugated cardboard is the only material doing well on the recyclables market.

“We’ve been having discussions about glass and whether we can keep doing that,” Murtaugh said. “We haven’t pulled the plug on glass, yet. … The whole recycling world has turned upside down in the last year.”

How can recycling in the cement and concrete sector contribute to climate change mitigation?

A Plastic Recycling Revolution Is Brewing … in China | Acumen

What can I recycle in Phoenix? Here are the tips you...