A massive fire has been raging for more than four hours in North Andover, Massachusetts, prompting a large response from first responders.

The fire broke out Tuesday evening at TBI, Inc., a recycling facility for construction and demolition debris, and quickly reached four alarms.

“The problem is you have large piles, a lot of material piled up and the fire will work its way down in so now it’s a deep seeded fire,” North Andover Fire Lt. Michael Beirne said.

The first call was made at 6:30 p.m., when workers were done for the day, meaning the building was empty when flames started spreading, and nobody had been hurt battling the blaze as of late Tuesday night. 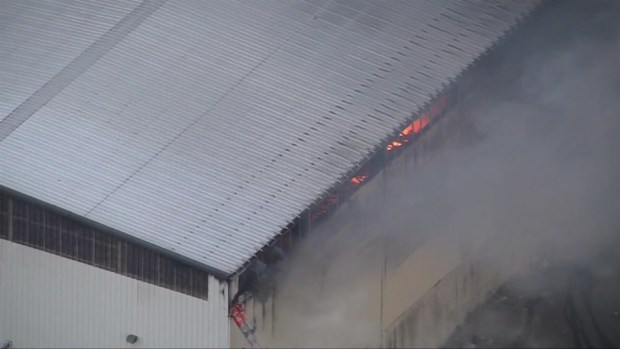 Smoke could be seen billowing into the sky near the Holt Road recycling facility that borders Lawrence Municipal Airport. It was visible from more than eight miles away as it swept across the Merrimack Valley.

Route 125 was closed to traffic in the neighborhood, according to MassDOT Communications Director Jacquelyn Goddard.

Firefighters encountered issues with getting water down the dead-end road and a hose had to be driven and dragged across Route 125 to a more powerful hydrant.

“We’re trying to get as much water on it as we can. Eventually what we’ll probably have to do is stark picking it apart, working our way down the pile with heavy equiptment,” Lt. Beirne said.

Additional fire trucks from nearby towns continued to arrive on scene as the fire raged on, with North Reading and Boxford among those to send engines.

The Red Cross responded to provide canteen service to the firefighters.

The state’s HazMat team and an emergency response team from the department of environmental protection arrived on scene and will monitor air quality. The fire department is asking people to close their windows and stay inside while the fire burns.

This is a developing story. Check back for updates.

Cleanup at Former Viva Recycling Facility Expected to be Complete by...

Recycling Tips Everyone Should Know

Holiday Recycling and Trash Service Information for The Woodlands

How we can recycle more buildings – Solid Waste & Recycling