ALBANY — The state announced Friday it will begin enforcing the law that bans single-use plastic bags on Oct. 19.

The law has been in place since March, but enforcement by the state Department of Environmental Conservation had been delayed by a lawsuit by the plastic industry. A state judge ruled in favor of the law on Aug. 20. In the interim, many stores still followed the law, but some did not.

The law, however, will continue to allow plastic bags used to contain sliced or prepared food such as unwrapped meat, fish and poultry, fruits, vegetables, grains and candy. Plastic bags used for food storage such as snack and sandwich bags as well as trash bags will also continue to be sold legally.

Since March 1, the state has allowed counties and cities to charge a 5-cent fee for paper carryout bags and that option will continue. Also allowed under the law are plastic garment bags such as from a dry cleaner, bags used by restaurants and taverns to cover prepared food, and bags used by pharmacies to hold medication.

The law seeks to encourage the use of reusable bags. They include durable bags made of cloth or other machine-washable fabric with handles designed for reuse with a minimum life span of 125 uses and strong enough to carry a 22-pound load at least 175 feet, according to the law.

“As with any environmental protection law, enforcement is critical,” said Elizabeth Moran, environmental policy director for the New York Public Interest Research Group, which had pushed for the law for years. “There are a number of stores that haven’t been compliant … it’s one thing to have a law on the books. It’s another to make sure there are environmental cops on the beat.” 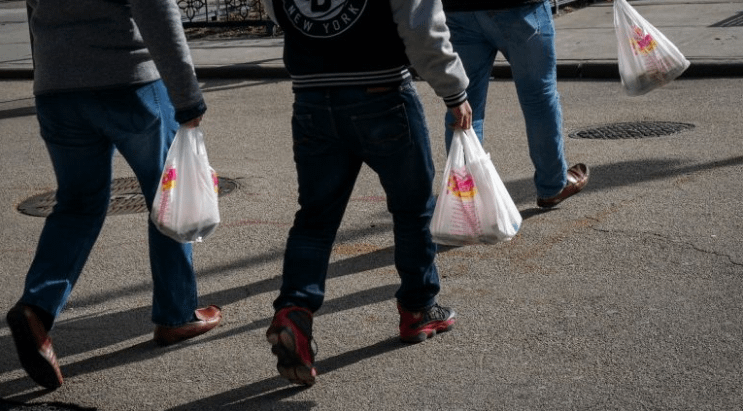 Single-use bags have a life span of minutes yet can pollute the environment and threaten wildlife on land and sea for as much as 400 years, according to the National Geographic Society. About 8 million tons of waste plastic flows into oceans each year, equal to five garbage bags full of trash for every foot of coastline around the world, according to National Geographic.

In New York, about 23 billion plastic bags are used each year. Under the law, a store would get a warning before it is cited for a violation. The civil penalty for a first offense would be $250, and $500 for subsequent violations in the same year. Businesses cited for a violation would be afforded a hearing before any penalty is levied. All revenue will go to an environmental protection fund.

Is There Trash & Recycling Pick Up on Thanksgiving 2019?

The Recycling Partnership and The PepsiCo Foundation Raise $25 Million for...

2020 Olympic podiums to be made from recycled plastic

What Things Can We Recycle At Home? – Ideas