Students at Ocean Breeze Elementary School in Indian Harbour Beach collected over 500 pounds of plastic caps and lids for a recycling project that is turning plastic into park benches for their school.

ABC stands for “A Bench for Caps.” Students collect certain types of recyclable plastic caps and lids and trade them for a bench made entirely of recycled caps.

“I thought it was a great idea,” said Mentillo. “The whole school is collecting!”

Eleven students from kindergarten to second grade in Mentillo’s class take 15 minutes each Tuesday to collect caps from classrooms and then sort them. The sorting process has become a routine assembly line where the caps are pushed along a table and swept off the end into a large plastic tub.

The students are learning to look for the recycle number on each cap to determine if is the right kind of plastic. Two, fours, and fives are numbers they can keep, according to the ABC Promise website. 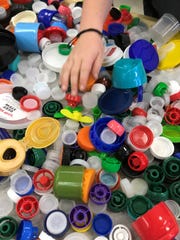 Students at Ocean Breeze Elementary gather and send in recyclable plastic caps and lids to ABC Promise in Indiana, which turns the caps into a bench for the school. (Photo: CONTRIBUTED PHOTO BY JULIE BOLWARE)

“If we can keep these plastics from ending up in the ocean, then that’s a better thing to do for the environment,” Mentillo told the class.

It takes 200 pounds of caps and $250 to get one bench. In addition, the caps must be delivered to Indiana. That’s where the Lions come in.

The Satellite Beach Lions weigh the caps, transport them to Indiana with the help of other Lions Clubs in Central Florida, and bring back the bench.

The students’ caps will be headed to Indiana later this month. The Lions have committed to purchasing two benches, so far.

No location has been selected for the benches yet, but students will walk the campus with the principal to decide, according to Mentillo. However, students say they would like to put the benches at the playground.

Julie Boleware is a member of the Satellite Beach Lions Club.

JanSport Launches the Recycled SuperBreak, their First Backpack with 100% Recycled...

What to do about all those boxes from Black Friday and...