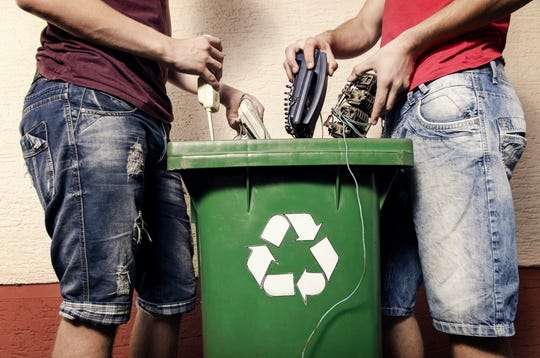 Many people don’t know what items can be recycled, a Rumpke study found. (Photo: Getty Images/iStockphoto)

Every time a load of recycleables is emptied at one of Rumpke’s processing centers, operators can count on finding the items from some container neatly packed into a plastic garbage bag. Employees at the plant have to manually tear open each bag and pour out its contents. Dark bags are thrown away because it’s unclear what’s inside and what would be introduced to the line if opened.

Rumpke Waste and Recycling will be doing a recycling audit of Cincinnati beginning in August in conjunction with the Ohio Environmental Protection Agency and a non-profit called the Recycling Partnership.

The group is in the process of conducting similar curbside checkups in Fairfield and Centerville. This is part of a state-wide initiative to educate people on what is and isn’t recyclable.

Facilities across Ohio have seen an increase in non-recyclable items being mixed in with acceptable items, said Molly Broadwater, Rumpke spokesperson.

When people recycle the wrong things, which Rumpke refers to as contamination, it can damage the facilities’ equipment. Broadwater said contamination costs Rumpke at least $1.5 million per year between disposal costs and the lost time from equipment being down. 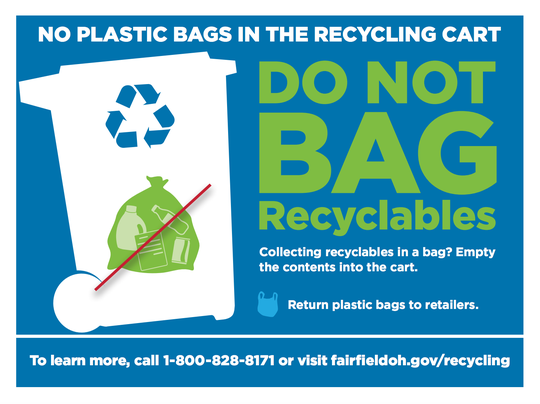 The most common mistake is placing items inside a plastic bag instead of letting them sit loose in the container. Other items that are often wrongfully recycled include clothing, batteries, pans and scrap metal.

“We want to make sure everyone’s recycling efforts count,” Broadwater said. “People are taking the time to separate their material out from their trash and to make sure recycling works effectively. We need to make sure the right stuff is going into those recycling containers.”

Broadwater said the program is based on education, and at this time Rumpke hasn’t considered any type of penalty for those who don’t recycle correctly.

Following the audits, curbside checkups began last week for all Fairfield residents. More than 350 bins were given warning tags, telling residents they contain contamination. This is about 6% of the total bins examined.

If these same residents have non-recyclable items in their bins again the next week, their bins won’t be picked up and will be left with another tag instructing them on the correct items to recycle. Rumpke also sends representatives around to speak in-person with residents and explain why certain items are not accepted.

Centerville is not giving warnings, and bins containing contamination will not be collected. These will also be given a tag to explain to residents what to take out, so the bin can be collected the next week.

For its first week in the program, Centerville had 55 bins not collected, which is about 16% of the total.

The Cincinnati curbside checks will begin in mid-August once the Fairfield program finishes. It will cover 20,000 single-family households along certain collection routes that Broadwater said are representative of the city of Cincinnati.  Cincinnati will follow the same model as Fairfield, with a warning before Rumpke leaves bins uncollected.

Rumpke sends these flyers in the mail to instruct residents on what is recyclable before the audit begins. (Photo: Provided/Rumpke)

The Cincinnati checks will take 10 weeks, as recycling is collected on a bi-weekly basis.

Residents will receive a flyer in the mail listing what items are recyclable before the curbside checks begin.

Cities were chosen based on applications for grant money to complete the program. Other cities included in the program are Columbus, Akron and Loraine.

Recycled Pens 🖊️ – Where To Recycle Old Pens And Markers

What can You do about Plastic Bags and Recycling?

Recycle Your Plastic Cannabis Jars at These Arizona Dispensaries

Your definitive guide to recycling in Birmingham

Reduce, reuse, recycle, but most of all, reduce