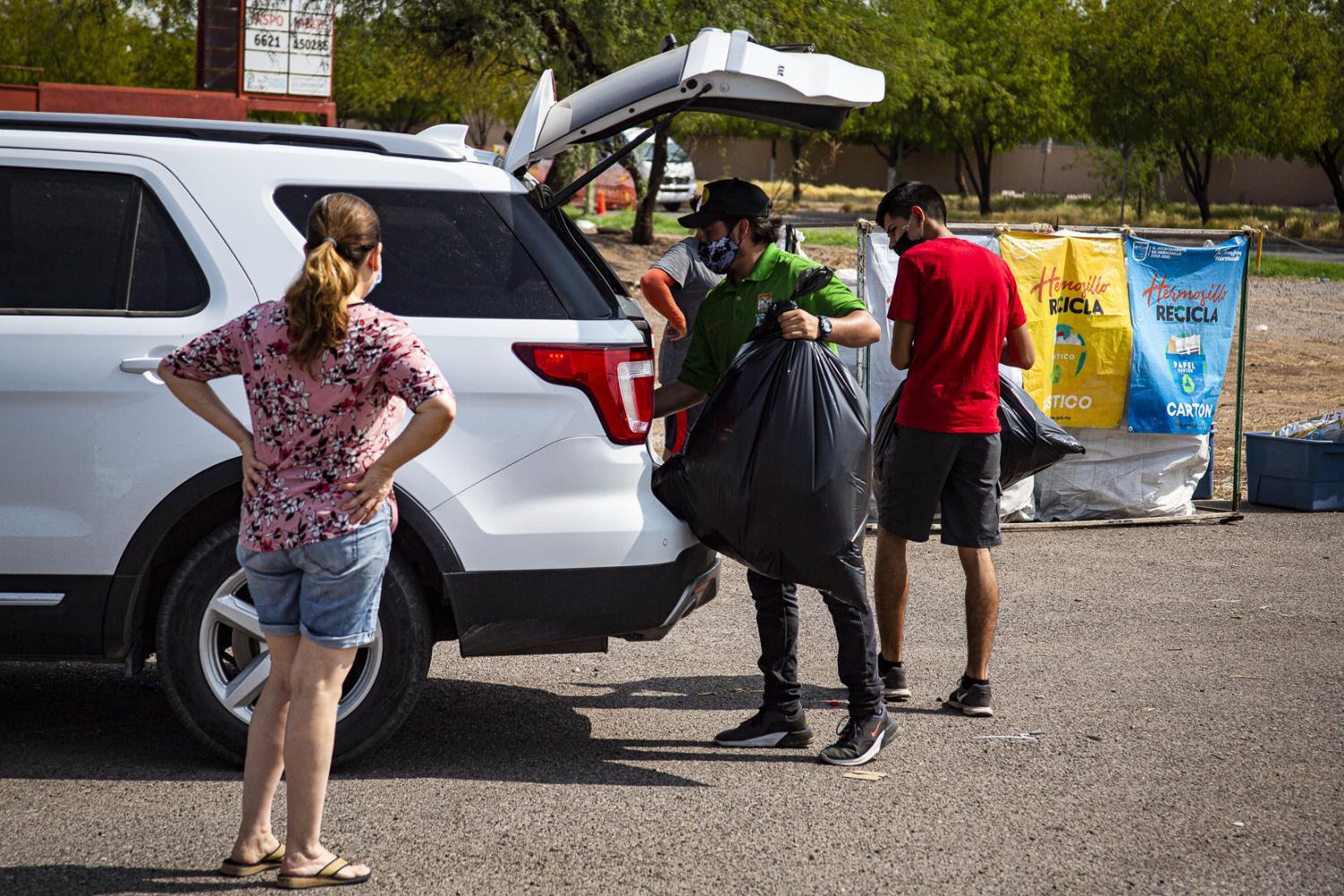 An Hermosillo resident gets help unloading her recyclable material.

On a recent Saturday, a slow but steady stream of cars pulled into a parking lot on the western edge of Hermosillo. Drivers popped their trunks, and with a little help, unloaded bags and boxes stuffed with paper, plastic bottles, cans and other common recyclable materials.

Longtime recycler Aleida Salas was one of them.

“Trash doesn’t go away when you throw it out,” she said. “It still has a long way to go.”

And the next part of her recyclable waste’s journey was with members of Hermosillo’s “pepenador” — or trash picker — union. 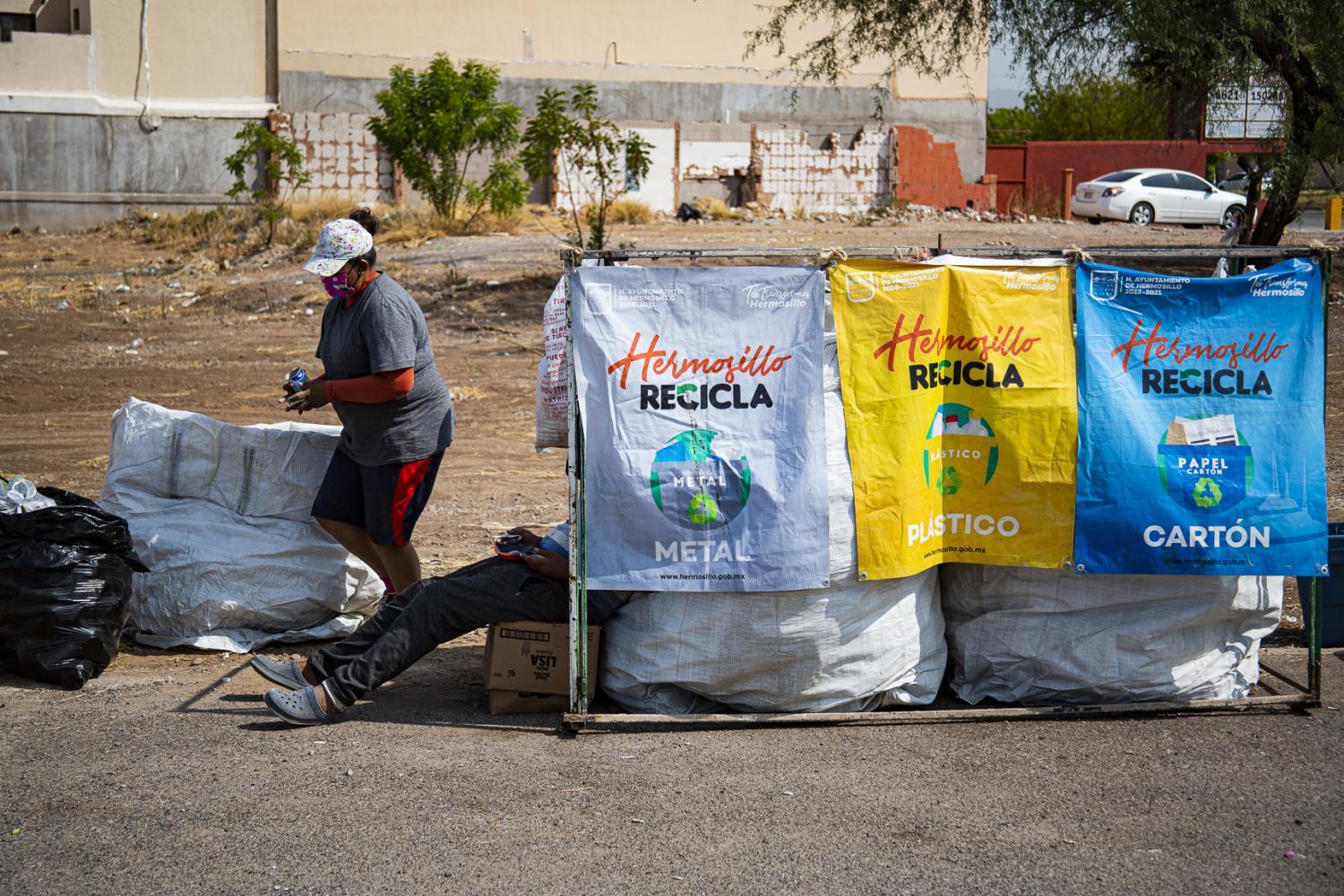 Carmen Yanez, a member of the pepenador union, sorts recyclables dropped off on a recent Saturday.

“We have to include them” Salas said of the pepenadores. “They’re a part of the community, they’re part of the trash separation process.”

“Trash for a lot of people is income,” she added.

Carmen Yanez, a member of the union for a couple decades, was on hand, sorting through some of the loads.

“Some bottles, egg cartons, but we don’t recycle those,” she said.

But generally the quality of materials that Hermosillenses drop off is pretty good.

“It’s a little cleaner than the landfill,” she added.

This arrangement — with pepenadores directly taking materials dropped off by city residents — was the fruit of protest by the union. And then collaboration with city officials.

In the fall of 2018, dozens of union members gathered in front of City Hall, armed with a bullhorn and banners. They were raising concerns that the new program could threaten the supply of recyclables that they depend on, according to a video report by Sonoran outlet Proyecto Puente.

In response, Public Services Director Norberto Barraza met with union leaders, and the pepenadores were invited to staff the new drop-off sites. 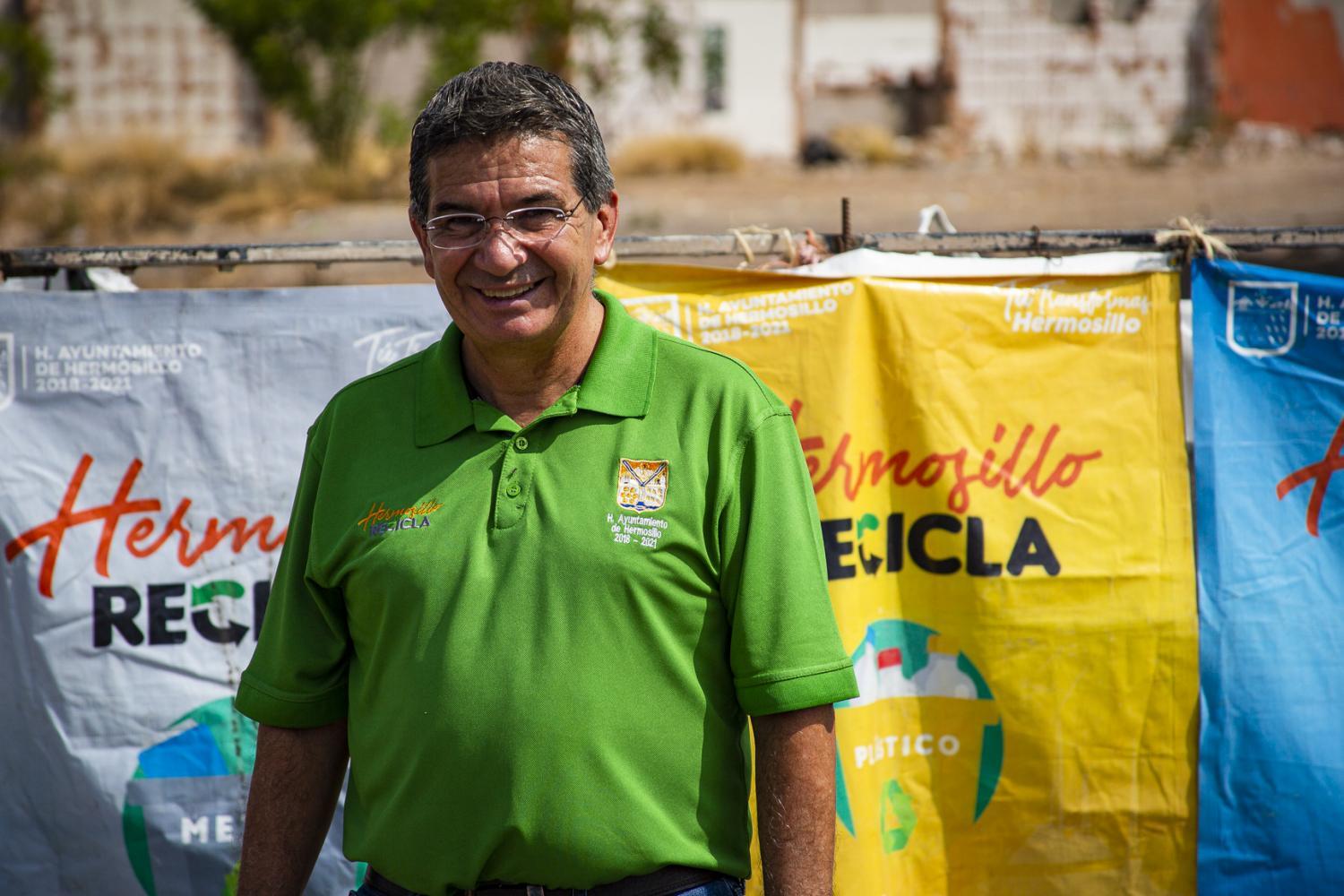 Hermosillo Public Services Director Norberto Barraza worked with the pepenador union, and in 2018 invited them to work at the recycling drop-off spots.

“They receive good, already separated materials,” he said. “And above all, instead of very difficult conditions like the landfill … now they’re in a public place, a clean place, where they receive recyclable materials directly from people.”

Every Saturday, he says several tons of waste are dropped off, helping the city towards its goal of substantially reducing flows to the landfill. But the centers are just the first phase of the recycling program.

“Then, the second step is moving to separation in homes,” he said.

That’s already underway in around 20 neighborhoods and 8,000 homes, according to Barraza. Further down the line, the city hopes to build a plant to sort out recyclables, where Barraza said the pepenadores themselves could work. Funding the project still needs to get worked out.

“They’re human beings,” Barraza said of the pepenadores. “You have to consider them, and respect them.”

“Very humanely, the director told us, it’s true, you’re right,” said Francisco Caperon, president of the pepenadores union, of the 2018 negotiations with Barraza.

He said it was the first time the union had been treated like that by a public services director.

But he’s still worried about the medium- and long-term prospects for his members.

“In reality, you don’t get much,” he said of the materials gathered at the recycling centers, especially compared to what members get at the landfill. Though he added that it’s still worth going to protect their place there.

He’s also worried that the separation effort could mean trash collectors take out more valuable material before it even makes it to the landfill. As to the prospect of a plant, and jobs for his members, Caperon is also skeptical, and worries that bigger interests could cut them out. 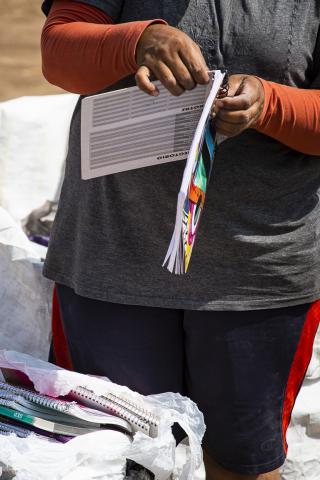 Carmen Yanez breaks down a notebook to recycle it.

“What we’re working on … is that moving forward, that we’re taken into consideration,” he said of their plans for whatever comes next for Hermosillo recycling.

If they’re not, they’ll have to remind officials, as they did in 2018, he added.

Asked about the union’s anxieties, Barraza said he understands their fear of losing work.

But he added that for the recycling program to be “viable, sustainable, we need to take them into consideration.”

At the same time, he said that continuing to work at the landfill is not sustainable due to the health risks, and that the separation plant could mean much better working conditions for pepenadores.

They Have The Expertise

Back at the Saturday drop-off, Salas was finishing up with the help of a public services worker. Every week, she said she gathers materials from her home and several neighbors to “help (the pepenadores).”

Asked about the potential role for the pepenadores at the separation plant proposed by Barraza, she says it’s a good idea because they already have “the expertise.” But only if it’s really a “win-win” for everyone, she added.

With her trunk empty, she drove off, but said she’d be back next Saturday.

Louisville metals recycling company might be delisted from the Nasdaq

South-East Asian countries are banning imports of waste for recycling