Quantafuel (QFUEL) is USD 0.8 Billion market cap based in Sweden and listed on the Oslo Stock Exchange. Quantafuel is the game-changing company for plastic recycling. It is the only company in the world that is able to recycle plastic into liquids chemically that can be used in new plastic production. The company is backed by Vitol, the largest trading company in the World, and BASF (OTCQX:BASFY), one of the world’s largest chemical companies. Vitol CEO stated: “We’re going to turn it (Quantafuel) into the biggest plastic recycler in the world.” Quantafuel is well-positioned to achieve this mission.

Only 14% of all plastic is recycled now. 32% of plastic ends up in nature. At current progress, there will be more plastic in the sea than fish in not that distant future. The current situation is unsustainable. EU is instigating the change by imposing EURO 800 tax per ton on plastic packaging from 1 January 2021. That should drive investment in plastic recycling.

There are two types of plastic recycling – mechanical and chemical.

Mechanical plastic recycling is quite difficult and energy-intensive. Plastic first needs to be cleaned, sorted into different kinds of plastic, needs to be separated by color. Only then can you produce pellets that could be useable for further use in mechanical recycling.

Therefore the way forward is the chemical recycling of the plastic. McKinsey and Company, a leading global consultancy, believes that chemical recycling will become a USD 75 billion revenue industry, with USD 25 billion in profits within ten years. Major international players are entering the race for chemical recycling of plastic. Those include Neste, Shell, Esso, Veolia. No one has provided any information, that they would have a technology.

Chemical recycling of plastic through the Paralysis of plastic is not unique. Quantafuel has been working on the technology for six years. Paralysis plants are running in Spain or Taiwan. This is not Quantafuel invention. The issue is that all existing chemical plastic recycling plants cannot produce clean oil products that would not include chlorine, sulfur, olefins, and nitrogen. Their products are not suitable for further use in plastic production. There is no plastic producer on the planet that could take an oil product that includes chlorine or olefins to produce plastic from them.

Quantafuel technology is unique after the initial Paralyses reactor. Quantafuel built a Miniature Refinery after the heating, so their factory starts where the others stop. Quantafuel purifies the oil by removing chlorine and other impurities such as ash, Sulphur, nitrogen, and so on and processes this through the catalysts, as has been done by large refineries for a century. Hydrocracking itself is nothing new, but Quantafuel is the only one who has designed a catalyst to perform hydrocracking in gaseous form. The gas is purified, we alter the molecular structure and achieve a light, a medium, and a heavy fraction that constitute the recycled raw material for new plastic products.

Quantafuel has been working on its technology for thirteen years. Quantafuel is the only one who is now operating a chemical plastic recycling plant that can produce liquids usable in new plastic production.

To achieve its mission, Quantafuel partnered with BASF, one of the world’s largest chemical companies, and Vitol, the largest trading company in the world with substantial infrastructure assets. The strengths and financial backing of those partners lends credibility to the Quantafuel investment case. 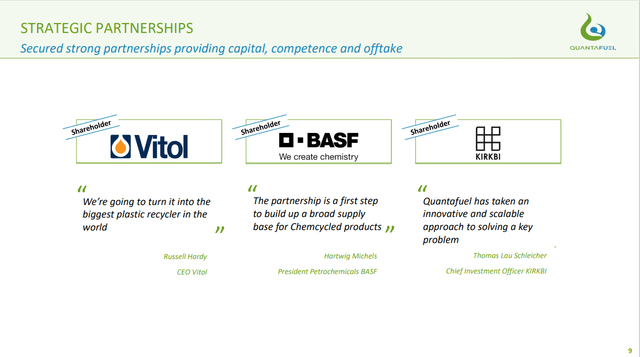 BASF has plastic recycling as one of its major strategic development plans. BASF is the founding member of the Alliance to End Plastic Waste. Quantafuel fits its strategic goals perfectly. BASF has been working with Quantafuel for years. In 2018 BASF entered Quantafuel with EURO 20 million investment. Both companies consult on design, and BASF provides technical support on the Quantafuel site when the production was starting. BASF and Quantafuel declared that they are planning to build together large plastic recycling plants. Quantafuel is included in BASF investor presentations: 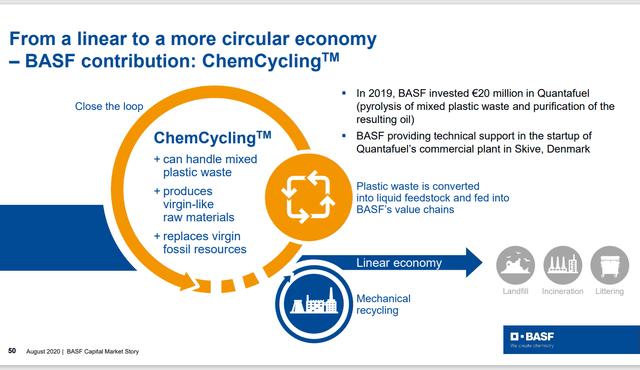 Vitol, the world’s largest independent energy trader, entered into a strategic partnership with Quantafuel in 2018. In the Financial Times interview, Vitol CEO said about Quantafuel: “We’re going to turn it (Quantafuel) into the biggest plastic recycler in the world.”

The process has already started. In September 2020, Vitol and Quantafuel announced the commencement of a feasibility study for a large-scale plastic chemical recycling plant. The timetable of the plant construction is below.

Kirbi, the foundation of the Lego family, invested this year NOK 250 Million. The foundation representative will be nominated to the board of Quantafuel. Their investment indicates that Quantafuel has backing from strong financial investors as well. 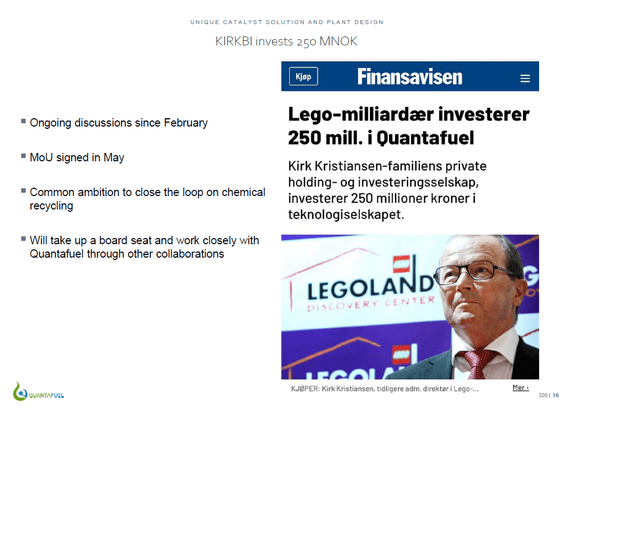 The first Quantafuel plant is in Skive, Denmark. Quantafuel’s Plastic-to-liquid (Ptl) plant is the first of its kind in the world, and the start-up is an important milestone for the company. The factory is presently scaled to process 20,000 tons of mixed plastic waste per year, which would otherwise be incinerated or disposed of in landfills.

The test operation started in early September under the supervision of BASF technicians. In mid-September, Quantafuel announced that they successfully started the operation of transforming plastic waste into high-quality liquid products. They confirmed that the main processes for control, operation, and safety have been working according to plan, and required standards. Quantafuel is now executing the plan for a gradual increase of capacity, first on one reactor, and then over the next couple of weeks on several reactors simultaneously.

Based on the existing contracts for raw material and offtake, the 20,000 ton per year plant in Skive is expected to deliver close to USD 10 million in yearly EBITDA at full production.

Plant in Denmark is the largest plant in the world, the most advanced and perhaps the only one of its kind. At 20,000 tons per year capacity, it is still very small by industrial standards. For all the Quantafuel partners, it is a prototype plant where they test the new technology. Based on the current plans, Quantafuel plans to start a new plant next year in Kristiansund in Norway, which will also be a test plant, where they plant to test new technology. After that Quantafuel, and its partners will establish its first large scale plants: first in Denmark. Quantafuel, with their partner Vitol, will start working next year on two large scale plants in Antwerp and Amsterdam. In 2023 the first plant in cooperation with BASF should be in operation.

Recycling can compete with Oil and Gas

Plastic can be chemically processed into oil and gas. The same product refineries are producing. The difference is that refinery needs to pay for its input – crude oil – around USD300 per ton. Quantafuel is being paid now around USD50 – USD80 per ton to take the plastic for recycling. Quantafuel input costs advantage is, therefore, around USD USD350 – USD380 per ton. As the EU introduces the EURO 800 tax virgin plastic tax, the Quantafuel costs advantage may increase further. 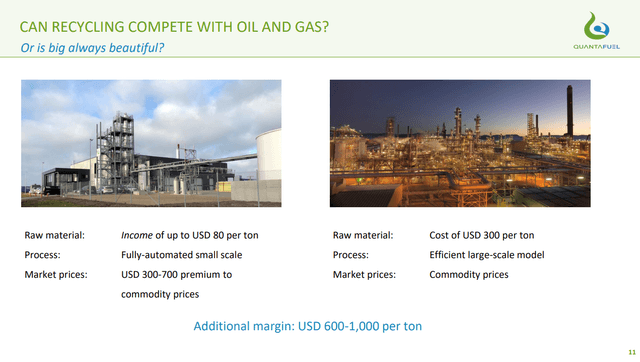 Below summaries the economics of 100 thousand tons plant for plastic recycling. Based on the below such plant would generate USD 50 million EBITDA. Quantafuel plans to build the plants on a 50/50 basis with their partners Vitol and BASF. Quantafuel should, therefore, generate from each plant EBITDA of 25 million plus 5 million in license fees. 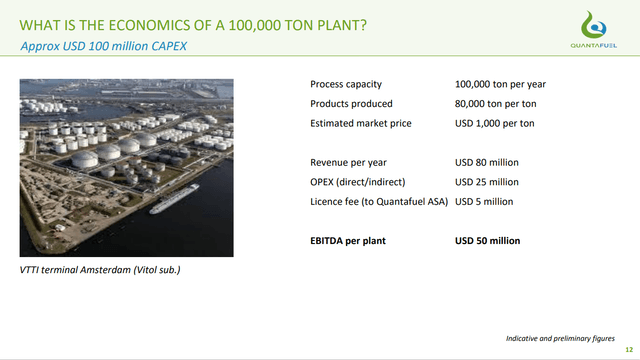 The share is now covered only by the Scandinavian brokers, which is the base of current Quantafuel shareholders. All brokers are very bullish.

That would imply that they assume EV/EBITDA multiple of 10-15 (assuming no debt in Quantafuel, which is an oversimplification assumption for the future). Based on this, anybody can do a back of the envelope calculation of Quantafuel valuation. You need to assume how many plants they may have and would be the EV/EBITDA multiple. Or you can just use Pareto estimate of that each plant would add 20-30 NOK per share. The point of this is that the valuation could be many times the current value. As the announcements on new plants would be coming in, the share price will increase. For example, Fernley Securities in their base case estimate, that Quantafuel with their partners will operate 23 plants by 2030.

For illustration, I enclose below the description of how Pareto arrived at their 100 NOK price target. Other brokers use a similar methodology. 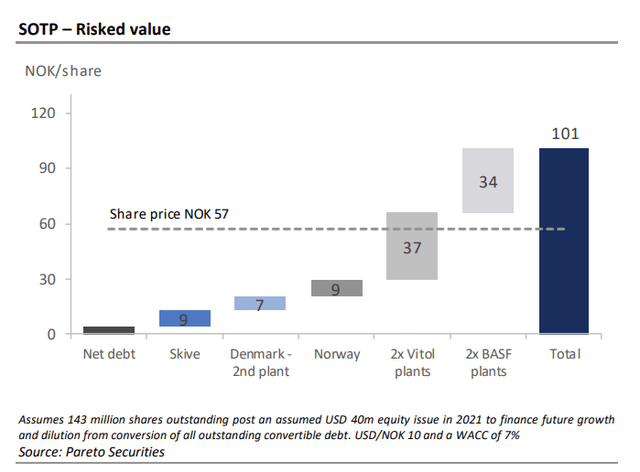 If you take Pareto estimate of 23 plants by 2030 and if you take their value creation by each plant of 20-30 NOK per share, then the value comes to 460 – 690 NOK per share. The share prices reflect the future growth of the business. The above should therefore be reflected in the share price well before 2030.

In summary, the broker consensus one-year share price forecasts are over 100 NOK per share, well above the current 55 NOK. I believe this is a longer play than one year. Quantafuel has everything going for it: substantial demand for the product, leading technology, first-mover advantage, strong partners, great access to capital, and strong government support worldwide. I believe that you can double your money in one year. As aluded to previously, I believe that Quantafuel shares could deliver much more than 100% returns, possibly driving the share price to NOK250 or higher.

According to the Scandinavian brokers, I talk to, there are two main events that influenced the recent share price moves – the recent issuance of new shares and the rotation from retail to institutional investors. 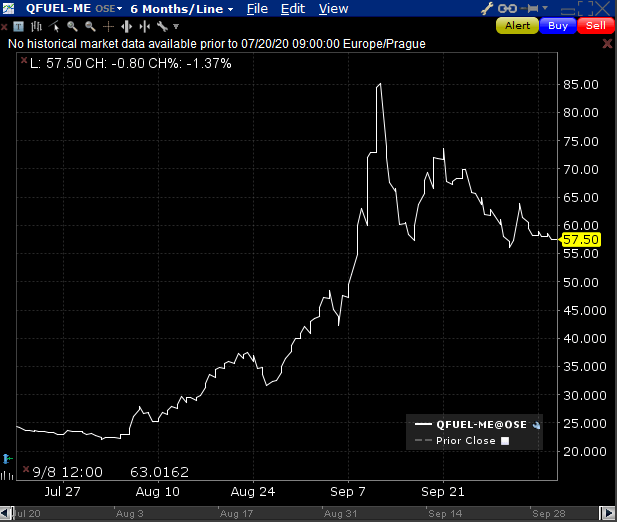 The share price peaked on 10 September 2020 at around 87 NOK. On that day, Quantafuel started pre-sounding of investors for a private placement. The information must have leaked, and that day the share price went down by more than 10% to mid-70s. The next day Quantafuel placed 770 million NOK share placement at 70 NOK per share. The share issue was many times oversubscribed, mainly by institutional investors. The 20% share drop initiated a change of shareholder composition. Until that moment Quantafuel’s share price was going only up. Many mainly German retail investors who got into Quantafuel early got scared by the first bigger share price move down and started selling. At the same time, mainly Scandinavian institutional investors started increasing their positions. The rotation caused the volatility that reached 130% (3 months volatility). The situation is still ongoing, retail investors are selling and the top five investors are buying. I believe that we will see range trading until the next announcement – the materialization of one of the below catalysts, which should help the stock to resume its original trajectory. In summary, I believe this is a good time to enter.

There are several near term catalysts:

Disclosure: I am/we are long QNTFF. I wrote this article myself, and it expresses my own opinions. I am not receiving compensation for it (other than from Seeking Alpha). I have no business relationship with any company whose stock is mentioned in this article.

Rise Of The Recycling Robots

Why recycling efforts are getting trashed: “This is a total no-no”

Gaithersburg expects 20% fee increase based on increasing costs of recycling,...

Make a pledge to recycle every day