Gallatin Public Works now has a glass crusher, funded by a grant, to recycle glass at a cheaper cost.
Jen Todd / The Tennessean

The Gallatin Department of Public Works released its annual report Jan. 30, which shows increases over last year in the amount of garbage residents generated along with an increase in recycling plastic, paper, cardboard and glass.

Trash totals from the report:

“It’s no surprise with more people moving to the area that we would see higher numbers,” said Gallatin Mayor Paige Brown in a release from the city. “We are very pleased that so many are using our recycling center.” 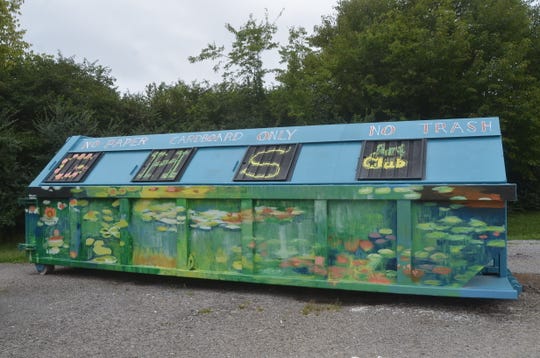 Gallatin’s recycling area has a work of art, that is also a functional recycling bin, painted by Gallatin High School and Vol State students. (Photo: Jen Todd / The Tennessean)

Gallatin continues to support recycling at its drop-off center on Long Hollow Pike. Last year, Gallatin received more than $12,000 in grant funding from the Tennessee Department of Environment and Conservation to acquire a cardboard bailer, and in October of 2017, the city installed a glass crusher.

While materials like cardboard and aluminum generate enough money to cover costs, the city pays to recycle other materials such as paper and plastic, the release states.

During the next five years, landfill capacity in the U.S. is expected to drop by more than 15 percent, according to the Waste Business Journal.

According to industry experts, a major factor in the capacity decline is a glutted market for recyclable material resulting largely from restrictions imposed by China, which has been a leading destination for used plastic, glass, paper and other material.

On Jan. 1, 2018,  China began enforcing a policy banning imports of several types of recyclable material and setting stricter contamination standards on others.

China states contaminants are often mixed with these materials, leading to environmental problems, according to the release from Gallatin officials. As a result, millions of tons of recycled materials are being stockpiled, and the price for recycled materials has been driven down to the point where recycling programs across the country are in jeopardy.

“We know many of our residents would like curbside recycling,” said Brown in the release. “We continue to evaluate this service; however, the current market does not make this a good option for Gallatin at this time.”

Facing similar problems, Hendersonville has put together a recycling and solid waste committee to take a look at the future of recycling and garbage collection in the city.

Hendersonville currently has a recycling pilot program that services 800 homes; however, officials want to make sure items that citizens are recycling are not winding up in landfills.

Gallatin is now participating in the Regional Solid Waste Directors’ Roundtable, a group of municipalities and solid waste authorities from around Middle Tennessee, the release states. The group’s goal is to look for ways to maximize the lifespan of current landfills and to identify best practices to help make solid waste affordable and sustainable.

“There’s no question a collaborative effort is better than Gallatin trying to come up with a solution on our own,” said Brown. “By no means should we give up on recycling, but it shouldn’t be the only tool we have in long-range planning of waste disposal.”

For a copy of the full report from Gallatin, visit www.gallatintn.gov/DocumentCenter/View/4768/Environmental-Services-Annual-Report_2017-2018-PDF.

Tom Charlier contributed to this report. Sumner News Editor Amy Nixon can be reached at anixon@gannett.com or 615-946-7549.

More: One of Gallatin’s recycling bins is not like the other: it’s a work of art

The Millennials – How to promote positive recycling behaviours at work...

Use compostable plastic – and the 16 other essential rules of...

“Shingle Mountain” operator told to stop recycling until it complies with...