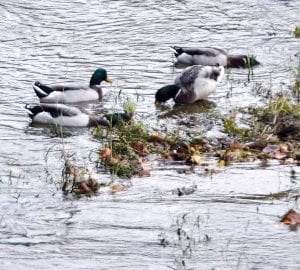 On Friday, Oct. 11, a group of male Mallard ducks hang out at the sand bar just north of the River Rapids pedestrian bridge. Photo by Jeanne Marcello

On Monday, Oct. 7, St. Charles Township Supervisor Tommy Sargent talked about the proposed MMWA contract, “It’s a 27-page contract, so much legalese. They’re trying to put more liability onto the township (and other participating municipalities).

As far as recycling, Sargent said, “I’m looking at bi-weekly (every other week) or nothing. I don’t see us going every week.” He explained that from what he sees, only about 25 percent of St. Charles Township residents are recycling.

Board members wondered if people would be able to keep track of the schedule to recycle every other week. Sargent responded, “If they really want to recycle, they’ll figure it out.”

Sargent explained that American Waste accepts glass with recyclables. He asked township board members, “Why would we want to recycle glass, when we’re paying by the ton? They can use it for road (in the landfill), but why would we pay them to take it?”

Township board members agreed that recycling glass would cost more and would still end up in a landfill.

The St. Charles Township Board voted to keep recycling and keep its residential curbside waste services at $156, the same as the current year.

St. Charles Village Manager Hartmann Aue has looked over the MMWA agreement. He said he didn’t see anything that stood out in the revised contract. Aue was appointed to represent the Village of St. Charles on the MMWA board.

During the village council’s Wednesday, Oct. 9 meeting, President Pro-tem Christine Neumann asked if the village is going to sign the agreement. Trustee Diana Kutz asked, “What if they raise fees?”

Aue explained that this contract is for a three-year term. This is designed so that the trash collection contract will expire at the same time as the recycling contract.

Neumann said, “I personally don’t want to stop recycling. Now, it’s more expensive to recycle than have it taken to the dump.”

Trustee Jim McPhail said, “I like recycling. I want to know that we’re solving the problem. I think we need to recycle.” He expressed concern at the possibility that recyclables would just end up in a landfill.

Aue said, some municipalities are apprehensive because of the potential fuel surcharge.

Neumann explained that they wouldn’t vote on the contract at this time.

The village council did vote on a resolution to continue recycling.

Kittens rescued after being found dumped in a recycling bin

This Interactive Map Shows How Good Your Borough Is At Recycling

Developments in Ship Recycling in 2019