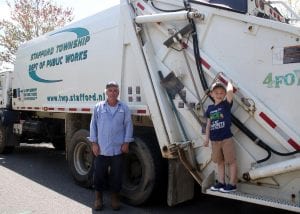 About a year ago, James Ciccone noticed a Stafford Township resident taking photos of him and other public works employees while out on trash pickup duty.

“This one particular woman kept peeking out the window, and then came out to take pictures,” said Ciccone, who routinely hauls away debris in the area south of the Doc Cramer recreation complex. “I thought she was going to call the town on us for something. I didn’t really know what to think about it.”

He received his answer moments later. Alison Negowetti was getting photos of the trucks and workers for her son, Ryan.

“Since he was about 1, he would look out the window waiting for the trash and recycling trucks to come,” she said. “Our trash is Tuesday and our recycling is Wednesday, and every week for the past four years he’s been obsessed with them. He’s really big into picking up trash, recycling and keeping the environment clean.” 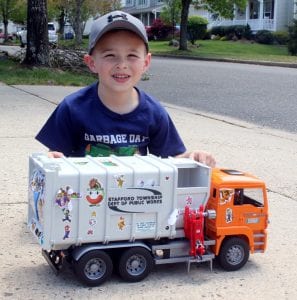 Ryan Negowetti with his own smaller version of a Stafford Township trash hauler, courtesy of town associate Richard Henecker. (Photo by David Biggy)

Now at 5½ years old, Ryan isn’t simply interested in trash and recycling haulers, he literally is fiendish about all things associated with them, from the “grabber” arms that snatch Stafford’s town-issued cans to the management of waste and recyclables.

Dave Valeriani, a neighbor whose family is close to the Negowettis, knows the young boy quite well.

“Theresa, my wife, took him to the movie theater one day, and she stuck her gum in an empty water bottle and tossed the bottle in the recycle can there,” he said, starting to laugh. “He was so upset by it that his dad came home from work and asked what had upset him so much, and Ryan told him what my wife did. So what could he do about it, right? Well, Ryan wanted him to call the theater to tell them to get the bottle out of the can and get the gum out of it, because it wasn’t supposed in there like that.

“That’s Ryan in a nutshell.”

The shell extends well beyond the size of the Oxycocus School student.

“He has an Atlantic County Utilities Authority vest because he’s been going to an Earth Day event there the past few years, and he wears that and pretends to be working as a trash guy,” said his mother. “He had a garbage truck cake for his third birthday. He’s been a garbage man for Halloween. He even has books about trash collection. Ryan loves everything to do with trash and recycling.”

But the love goes far into the depths of his soul, as Valeriani knows. On occasion, two of his children, Meghan and Mark, will walk around the neighborhood with Ryan to inspect the neighbors’ trash cans, making sure they’re in their proper places along the curb for that day’s pickup.

“He goes around to make there are no obstructions and the truck will be able to effectively grab the cans,” Valeriani said. “He’ll tell my kids, ‘It’s 8:08. Don’t be late. We have to make sure all the cans are lined up right.’ It’s hilarious. And sometimes, he takes out some of the neighbors’ cans for them. There are six or seven who let him do it, and you always know when Ryan’s done it because the cans are perfectly lined up with the wheels right up against those curbs without an inch to spare. He’s a good-hearted young boy who cares about the environment.”

Ryan’s good heart extends to the workers themselves. He often makes homemade cards for them and will bring out drinks to help them stay hydrated.

“He always comes out to greet us and wave at us,” Ciccone said. “He’s very mannerly and thanks us for our service. He gets excited to see us, and that makes our day. He appreciates what we do, and he cares about doing his part to keep the town clean. He’s got such a beautiful heart. He’s amazing.”

And because he is such a big fan of the Stafford Public Works crew, one of them, Richard Henecker, gifted Ryan his own miniature Stafford trash truck. Ryan’s mother says he puts it to good use.

“He has these little trash cans that go with the truck, and he takes old receipts and papers and breaks them into little pieces, and, first, makes a landfill before he fills the cans,” she said. “Then he takes the truck around and picks up the trash. He loves that truck.”

Of course, given his propensity for picking up trash, it should come as no surprise Ryan sometimes will bring gloves and a bucket to the park to do exactly that. As for the possibility of someday taking up a career in medicine or law, he emphatically shook his head.

“It’s cool to pick up trash,” said Ryan, who also enjoys the town’s leaf trucks. “I want to be a trash man.”

“He’s 100 percent gung-ho with what we do,” he said. “He cares about his environment, and that’s really the beauty of who he is. He’s a caring young man who’s probably going to be running public works someday, or maybe he’ll be doing something even bigger with recycling on a regional or national level. He’s got a bright future.”

Not sure what to do with used razors? You can now...