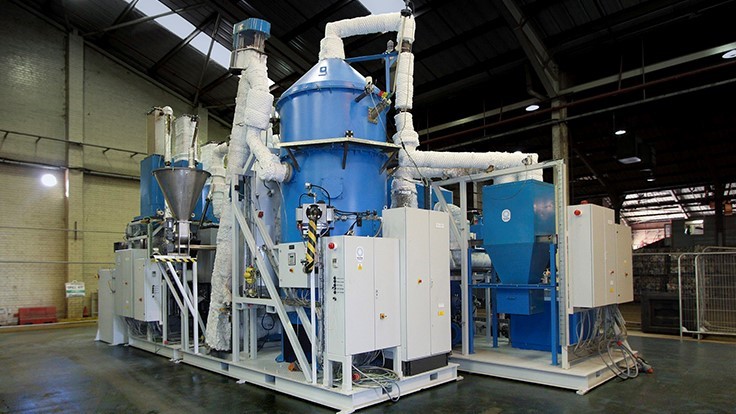 The RT7000, the plastic recycling technology built by Recycling Technologies, is located in Swindon, England.

Plastic littering and waste would cease to be a problem if there was a way to make plastic so valuable that people wouldn’t want to throw it on the ground.

However, according to one chemical engineering lecturer from the University of Birmingham in the United Kingdom, eliminating plastic is not the solution. The solution is recycling plastic efficiently.

On Nov. 19, Kit Windows-Yule, spoke on plastic recycling at a UI seminar open to students and faculty.

Windows-Yule’s research focuses on imaging techniques that can be used in plastic recycling technology, a step closer to solving the plastic waste crisis.

“A lot of the world these days is trying to demonize plastic, and although I might talk like that, plastic is an absolutely wonderful thing,” Windows-Yule said in the online seminar.

Windows-Yule said that there is a lot of negative association with plastic when in fact, it’s an easily-produced, lightweight and durable material with little alternative solutions.

“I really do love plastics, they’re an extraordinary material,” he said. “In many cases, it’s just not viable to replace it. The only problem is we aren’t doing a good job of recycling it.”

The RT7000 is a new technology that can turn residual plastic back into the original oil it was created from. It involves heating plastic within a fluidized bed, which is the liquid mixture of melted plastic.

“The problem is that it’s a great big solid, opaque container with all these complex dynamics going on inside,” Windows-Yule said. “Using typical technology, you can’t have the first idea of what’s going on in there.”

This is where Positron Emission Particle Tracking comes in. PEPT allows people like Windows-Yule to track individual particles within fluidized beds.

PEPT works using radioactive labeling that shoots gamma rays into a particle, then tracking the resulting trajectories to locate the particle in the fluidized bed.

The technique was invented at the University of Birmingham and can be applied in any industry involving particles or liquids, Windows-Yule said.

“PEPT allows us to look inside these systems, allows us to see if something’s not right, to see if it’s evenly distributed, see if there’s heat transfer, and if not, run it at higher flow or something like that,” he said.

Using this technique, scientists can better understand the dynamics and physics of the reactor used in devices like RT7000 and improve the system.

“PEPT gives us understanding to make it from a promising technology to an actual world changing tech, that’s what we’re trying to do,” Windows-Yule said.

This online seminar was one in the Illinois Sustainable Technology Center’s Sustainability Seminar Series.

Elizabeth Meschewski, senior scientific specialist, organized this seminar and said she invited Windows-Yule to speak because she wanted people to be informed about the research that he’s doing.

“We need a suite of solutions to solve the plastics in the environment issue,” Meschewski said. “We think that (Windows-Yule) has some good ideas on that.”

Meschewski also said the prospect of recycling plastic is important.

“It’s a little known fact that plastics can really only be recycled two or three times before they are downgraded into products that can’t no longer be recycled,” she said. “If we can convert plastics back to the starting product, that means that they are almost infinitely recyclable.”

The RT7000 is also entirely self-sustainable. Light hydrocarbon gases — another end product besides oil feedstocks — can be used to power the entire system.

“If the system itself is wasteful and sufficient, it’s not really doing its job of saving the environment,” Windows-Yule said.

Overall, Windows-Yule and his team at the University of Birmingham are excited for the applications of this technology and its implications for the future of plastic waste.

“The most exciting part is if it works,” he said. “If it does what we expect it to do, it’s going to genuinely change the world. It could solve the plastic waste crisis.”

Upcycle pasta to put words on anything! – Recycled Crafts

Towards a Common Practice of Material Recycling