When you throw away a plastic bottle or empty coffee cup at USC, where does it end up?

If you toss it into the correct bin on USC’s University Park Campus, chances are it won’t fester away in a local landfill. A sizeable portion of trash collected at the university goes to recycling or composting facilities, thanks to USC’s intensifying effort to embrace sustainability.

Recent initiatives include installing 120 new bins with separate waste and recycling sections in academic and administration buildings on the University Park Campus. An additional 60 recycling bins have been installed at USC Village and outdoors across campus. USC also is composting more of its food scraps in residential dining facilities and encouraging football fans to recycle while tailgating on campus during game days.

Leading the charge is Ellen Dux, programs manager in the USC Office of Sustainability, alongside other sustainability colleagues like Gina Whisenant from USC Facilities Management Services and Nichelle Mitchell-Huizar from USC Auxiliary Services.

Together, they are pushing green initiatives to ensure that USC meets the ambitious goals of its Sustainability 2020 Plan. Among the targets: USC will divert 75 percent of its waste from local landfills by 2020. Even if the university achieves the milestone, it will need to keep improving. The city of Los Angeles has mandated 90 percent diversion by 2025.

“Right now, we are at about 44 percent,” Dux said. “So we are going to have to take some really aggressive steps in the next few years to get to that level.” 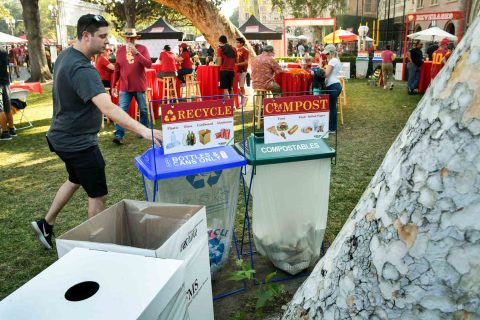 A small increase in recycling and composting can have a big impact, by virtue of the staggering amount of garbage produced on the University Park Campus, including USC Village. Between August and November 2018, USC disposed of 1,276 tons of solid waste, 714 tons of recycling and 218 tons of compost. The university also recovered 54 tons of food waste during the same period.

“Last year, Trojans generated over 12,000 tons of waste on campus, and about half of that amount ended up in local landfills,” Dux said. “We can definitely do better in terms of reducing and diverting more of that waste, and it’s something the university is making a major priority.”

As critical as those efforts are to pull recyclable and compostable material out of the waste stream, university leaders are also emphasizing a broader focus on minimizing trash.

“We need to increase our opportunities to reduce and reuse whenever possible,” said Whisenant, USC’s waste and recycling supervisor. “Eliminating the waste before having to dispose of it is the key to protecting our environment and reaching our goals.”

Eliminating the waste before having to dispose of it is the key to protecting our environment and reaching our goals.

People should also support companies that prioritize sustainability, Dux said. She recently gave praise on Twitter to a local restaurant with clearly labeled recycling bins. She also sent a letter to a company in Italy expressing her disappointment with the amount of packaging used to ship a small bottle of her favorite perfume from New York to Los Angeles.

“There is no doubt that the No. 1 thing everyone needs to do to be a sustainable citizen is use the power of their voice, their vote and their wallet to demand sustainability change,” she said.

Protecting the environment is just one benefit of going green

Embracing sustainability is a growing focus across society, especially as scientists make increasingly dire predictions of the negative consequences of climate change. Compostable materials, particularly food, can wreak havoc on the environment by producing greenhouse gases.

“Those items are just moldering away in landfills, throwing so much methane up into the atmosphere,” Dux said.

USC also stands to benefit financially by recycling more of its garbage. The price of dumping a ton of trash into a California landfill has climbed steadily, up from $34 per ton in 2001 to more than $75 per ton today.

“Even if you don’t care the slightest bit about the environment, that’s a great reason to reduce and recycle trash,” she said. “It’s going to cost you a lot less.”

USC learning from success of zero-waste efforts at Coliseum

As the emphasis on sustainability grows at USC, university leaders are drawing inspiration from a successful program at the Los Angeles Memorial Coliseum. The stadium’s waste diversion initiative twice earned top honors for USC in the Pac-12 Zero Waste Bowl. The competition pits the conference’s 12 institutions against one another in a battle to divert the most trash from their sports venues, alongside other sustainability outreach and education efforts. 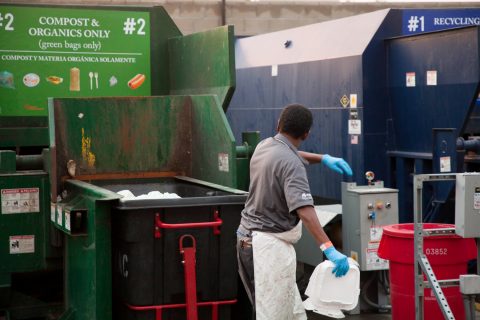 Stadium workers sort through every piece of trash during the home games at the Los Angeles Memorial Coliseum for the USC Trojans and Los Angeles Rams, diverting more than 90 percent of garbage to be recycled or composted instead. (Photo/Courtesy of Ellen Dux)

During every home football game — for both the USC Trojans and Los Angeles Rams — the stadium staff sorts every piece of trash generated by thousands of fans. The goal: diverting more than 90 percent of garbage from the landfill through recycling and composting, the industry standard for zero waste. That takes into account things beyond the venue’s control, like someone sneaking in food in a nonrecyclable container or waste generated by athletes on the field, such as bandages, gauze and training tape.

“Our fans like to talk a little trash now and again, so we’re hoping they also might think about their trash during the game,” said Brian Grant, senior associate director of facilities and project management at the Coliseum.

He encouraged visitors to the historic venue to consider whether their trash is recyclable — and whether they can take advantage of alternatives offered by the stadium’s vendors like compostable plates, forks and spoons.

“Hopefully, our fans will take a second to look at the signage we have around the stadium that will help them figure out where things should go,” he said. “It’s a pretty simple system.”

Grant is optimistic the Coliseum’s approach will offer guidance for USC as it pursues the same goal of zero waste in other facilities and venues on campus. “We’re just one aspect of the university but we can also share the lessons that we learned building our program with the rest of the university community,” he said.

As USC extends its zero-waste efforts onto campus, one major focus remains football related: tailgating. Dux hired about 20 students to serve as “Trojan Trash Talkers” for the five home games during which tailgating on campus was allowed this season. They encouraged fans to recycle and handed out reusable bamboo straws. 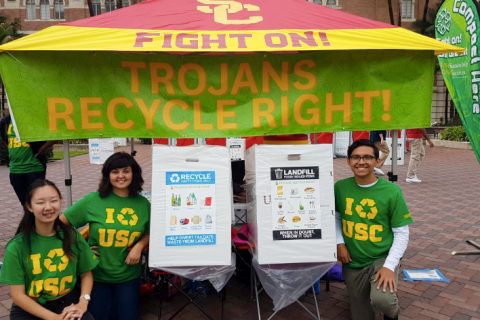 They also educated visitors about USC’s dual-stream bins, describing what should go into the landfill versus recycling containers. Dux said it can be tricky to keep recycling bins clean from contamination by items like soggy cardboard or food waste.

“If it’s icky, sticky, ooey or gooey, don’t put it in the recycling bin,” she said. “When in doubt, throw it out.”

It’s a message Mitchell-Huizar is also trying to spread across campus. Only a few pieces of inappropriate trash in a recycling bin can contaminate an entire load, she said. That forces the waste hauler to toss it all into the trash.

As sustainability programs manager for USC Auxiliary Services, Mitchell-Huizar aims to keep contaminated recycling and food waste to a minimum, educating the campus community to put trash where it belongs.

“My goal is to increase engagement for all of our students, with a focus on the incoming freshmen, getting them on board with recycling and generating less waste,” she said. “If you educate students about USC’s culture of sustainability when they first arrive on campus, it becomes normal behavior and a regular practice to divert waste throughout their time at USC.”

Eliminating food waste at USC is next goal

In partnership with Catherine Atkinson, sustainability affairs director for USC Undergraduate Student Government, Mitchell-Huizar also is rolling out a pilot composting program this year with about 20 students in Cardinal Gardens and Nemirovsky Residential College. Students learn what kinds of food scraps can be composted, such as vegetables, fruits and peels, grains, cheese, coffee grounds and eggshells. Raw meat and dairy products such as milk, yogurt and cream have to go into the trash.

If you educate students about USC’s culture of sustainability when they first arrive on campus, it becomes normal behavior.

The university also is collaborating with a local nonprofit to provide food not taken by students in dining halls to feed homeless and low-income families in the local community. Dux envisions establishing a similar program for unused food from large tailgating events on campus.

“There is tons of food, literally, that is prepared for each meal and never eaten,” she said. “If we can eliminate that waste and help out our local community, it’s a win-win for everyone involved.”

Your recyclables are going to the dump and here’s why

JanSport Launches the Recycled SuperBreak, their First Backpack with 100% Recycled...

What Is Sustainable Living? And, How Can We Practise It In...