SPRINGVILLE – As some residents have been putting garbage in the new recycling totes within the village, the Village of Springville Board of Trustees discussed the issue and urged residents to follow the guidelines with the totes at their Aug. 17 meeting. 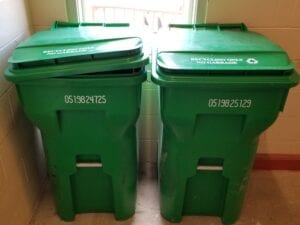 The Village of Springville urges residents to follow all rules with its recycling totes.

“I would like to remind residents that those green totes are for recycling only,” Trustee Nils Wikman said. “We have a few people taking liberties by putting their garbage in those totes and that defeats the whole purpose of recycling.”

“Our residents have to know that their lack of cooperation with the system … and if we don’t get the voluntary compliance with that, it’s just driving the cost way too much,” Krebs said.

Administrator Liz Melock reported normal shutoff procedures and penalties will begin on Sept. 8 for Springville utilities. If a person is having trouble paying their bill after the date because of a change in financial circumstances due to COVID-19, additional protections are available. People must contact the village at 592-4926, ext. 1000 to use the protections, which include the right to enter into a deferred payment agreement.

Melock also reported the village election is set for Sept. 15 from 12-9 p.m. at the Municipal Building, 65 Franklin St. To be elected is one village justice for a four year term and three trustees; two trustees for a four year term and one for a two year term. Kelly O’Neil Adams will be on the ballot for the village justice seat. Nils Wikman, Terry Skelton, Reed Braman and Devin Kowalske will be on the ballot for the trustee seats, with the most votes determining term. Applications for an absentee ballot can be found online at villageofspringvilleny.com under the forms section or can be mailed to a registered voter by calling 592-4926, ext. 1000.

In other board news:

– Superintendent of Public Works Duane Boberg reported the village will be getting lighted crosswalk signs at Mechanic Street and at the Rail Trail on Main Street.

The next Village of Springville Board of Trustee meeting will be Monday, Sept. 14 at 7 p.m. in the Public Safety Building, 65 Franklin St. Social distancing and other health and safety guidelines will be practiced during the meeting.

What can we do to stop fishing nets waste & threats?...

Jane Fonda Hits 2020 Oscars In Recycled Gown After Swearing Off...

Where To Recycle Old Batteries So You Can Be Sure They’re...

King of the Road: How Advanced Disposal Practices Safe Driving